Evil Dead: The Musical is basically an interpretation of the first two movies, with the emphasis on the funny, unlike first movie that was not initially a comedy. The plot of the musical is the combination of Evil Dead 1 and 2 as well as a little bit of Army of Darkness. Evil Dead fits the musical format quite well and the songs are an essential part of the story, especially if you did not see the movies. 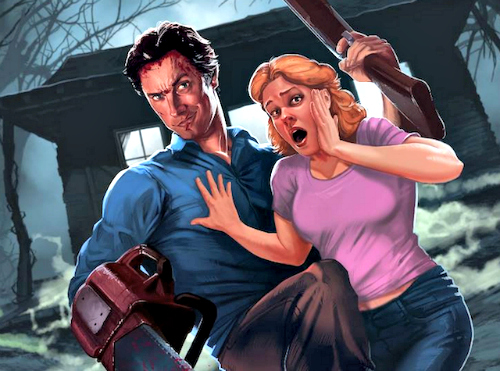 The first act starts off a little bit slow, but story develops and musical performances won’t let you become bored. There is a great amount of gore and swearing throughout the musical which is quiet rare these days. Part of the gore includes the splatter zone, where you’ll be splattered at some point of the musical, which is very fun even if it doesn’t sound like it. The singing performances are also spectacular, with the music perfectly suited for the Evil Dead’s atmosphere. Fans of Evil Dead may be concerned if the Ash in the musical authentic or not, but I found his performance exceptionally good.  Scott Walters, the actor who played Ash, did a great job of keeping the charisma of his character.

The musical is great for both Evil Dead fans and people who have never seen any of the movies, making Evil Dead: The Musical is a perfect choice for Halloween. However, you can get much more out of it if you have seen the movies. Musical makes fun of the movies’ clichés and there are a great amount of quotes of Ashe that are applied greatly to the musical. Finally, if you are Evil Dead fan or musicals fan or you like both, then Evil Dead: The Musical is definitely a place to go. If you did not see the movies definitely watch them and then go to the musical, but if you have, watch them again anyways.