The Velveteen Rabbit at the Waterfront Theatre 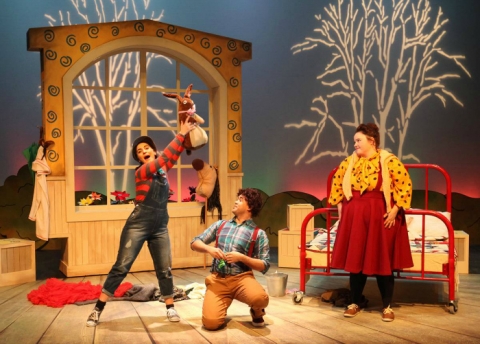 In a children’s nursery amid balls and books, and sailing ships, Margery Williams’ timeless tale of The Velveteen Rabbit comes to life. Under the direction of Deb Williams, and through the imagination of Carousel Theatre actors Amanda Testini (One, or The Boy), Victor Mariano (Two, or the Velveteen Rabbit) and Steffanie Davis (Three, or The Nanny), the opening performance on March 4th —at Granville Island’s Waterfront Theatre—takes us on a journey through time and space.

As the lights are dimmed, theatre staff introduce the performance by first inquiring if there are other rabbits in the house, or perhaps, other stuffed animals that are much loved. As young voices are heard murmuring—at the excitement of having brought their stuffies along—rabbits, bears and other stuffed animals are waved through the air.

Once the animals are acknowledged and welcomed, and the audience is settled, we were invited into a space of magical suspension of the imagination, where all things are possible. The actors take to the stage, not in the usual opening scene manner that a novice theatergoer might expect, but with an educational flair. In their attempt to prepare the younger audience members in how to follow a play, questions are asked. Questions to expand imagination:

What ingredients are needed to make a play?

And so, the narration begins…

“There was once a velveteen rabbit,

and in the beginning he was really splendid […}”

As the play gets underway, the relationships between the characters soon become believable and endearing to the audience. From the relationship between One, the boy, and Three, his nanna and primary caregiver, we recognize the influence she has over the boy such that when One’s stuffed animal goes missing, One is quick to accept Three’s presentation of the velveteen rabbit.

And so, after living “in the toy cupboard or on the nursery floor” (Williams, 1922, p. 5) for a very long time, the velveteen rabbit is taken out to accompany the boy throughout his days, and over time, he becomes a faithful playmate to the boy. While the other toys and the outdoor rabbits try to convince the velveteen rabbit that he is anything but real, the Skin Horse bestows wisdom upon the lopsided rabbit—wisdom that will forever change how he sees himself:

When a child loves you for a long, long time, not just to play with, but REALLY loves you,

Although the play’s narrative indicates that the boy had always been well-versed in exploring his imagination, it is through his relationship with the velveteen rabbit that the story develops to expand and illuminate the imagination. It is a journey that encompasses a child’s world of play and the beauty of friendship in this classic coming of age story.

While the dialogue between the characters is interspersed with Williams’ original 1922 text, the interactions between the characters and the development of the story is complimented by song and dance. We are further engaged with the velveteen rabbit’s dynamic and engaging performance of I’m Real and the nanna`s lulling us into sleep-time with her gorgeous performance of “Dreaming on the Sea.”

The simplicity of the stage allows for quick and easy set changes—from the boy’s nursery and the outer world to the inner workings of the imagination. One scene takes us into the boy’s fantasy of sailing—which is conveyed through shadow puppetry and is cleverly displayed with a makeshift sail created with a bed sheet and illuminated in the dark to illustrate a boy and his rabbit sailing the seas.

As the play’s narrative progresses through the seasons of time, we see the boy struck with scarlet fever. Unfortunately, with the threat of future contamination looming, his faithful playmate is taken from the nursery to be burned with the other infected items. Saddened by the separation, when the velveteen sheds his first tear, the garden fairy appears to transform into a real, live rabbit.

Years later, when the boy is older, the playmates meet again. One day as the boy meanders through the woods he comes upon a rabbit who causes him to take pause and to wonder:

Is this the same floppy rabbit from my boyhood of days gone by?

As the rabbit also recognizes the boy, he hops towards him and stands on his hind legs to rub noses—just as he had done so many times before.  It was enough to assure the boy that yes, this was his childhood playmate—his velveteen rabbit—who in the beginning,