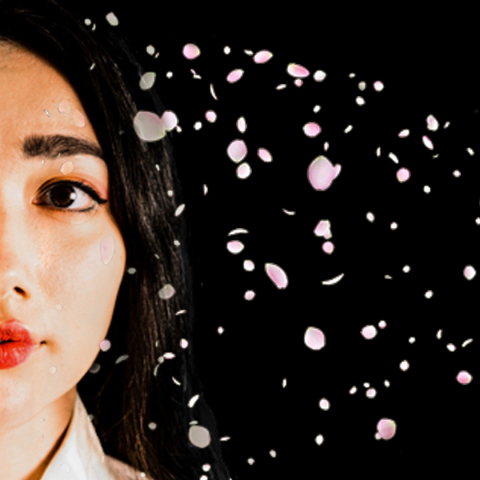 Originally written by Japanese playwright Yukio Mishima, Sobato Komachi and Hanjo are two modern Noh plays. Yukio Mishima reinvented the plays to make them more relatable to a contemporary audience. Noh plays are simple and sparse, performed on a plain black-box stage with minimal props. Traditionally, the actors would wear elaborate Japanese costumes. However, as this production takes a 21st century twist, the actors wore modern casual costumes. Starting with Sobato Komachi and instantly followed by Hanjo, this hour-long show told tales of love and death.

The original version of Sotabo Komachi is set around two priests running into the protagonist Komachi in the woods. This reworking saw Komachi, played by Wynn Siu, meeting a poet in the park, where they argued over love, instead of religion. The young poet, played by Quinn Hinch, is blinded by the concept of love, obsessed with the couples in the park but painfully lonely himself. He resents Komachi for making the couples feel uncomfortable and calls her ugly. Komachi laughs at his comments and talks about her beauty as a younger woman, which the poet can’t help but to scoff at. ‘A beautiful woman is always a beautiful woman’ replies Komachi; encouraging the audience to consider what beauty is. For the poet, it’s clear he sees beauty as what is on the outside, whereas Komachi knows that although she has grown old and tired, she is still beautiful. Throughout the play there is an unspoken battle between beauty and wisdom, the poet representing beauty and Komachi symbolising wisdom.

The poet listens to Komachi’s retelling of her younger years, when she had many suitors but was cruel and rejected them. The poet starts to fall in love with Komachi as he begins to see her for what she was in her prime. Unfortunately, this can only end tragically, for men who tell Komachi that she is beautiful become cursed, lose their mind and die imminently.

Hinch’s portrayal of the poet’s character progression was enjoyable. At the start of the play he was a drunken mess, rude and unkind. The character of the poet is unlikeable, as he is unpleasant and can’t see past the superficial things in life. He is a hopeless romantic who is too scared to experience things himself, so instead he lives through the couples in the park. However, towards the end of the play, when he is losing his mind, I began to feel sorry for the poet. He forgets that his superficial tendencies as he falls in love with her wisdom and her past. And although Komachi has spent the duration of the play reminiscing on her beauty, she is desperate for the poet to fall out of her spell so that his life can be saved. This interpretation of the play saw Komachi regretting her behaviour and Siu’s performance showed the character’s development from the start to the end. Where at first, she was arrogant and unbothered, she eventually began to care about the poet’s wellbeing. My favourite part of this play was where the poet realised he is going to die and Komachi subsequently becomes frantic. Hinch’s ability to simultaneously emote his love while also aware of his imminent death, in unison with Siu’s effortless portrayal of the regret and sadness Komachi was feeling created a wonderful contrast on stage. The simplicity of the staging, only three wooden benches and a lamppost allowed for the acting to take centre stage with no other distractions.

The play focuses on quite serious themes, so the comic relief came from the chorus. Wearing traditional Noh masks, their purpose was to educate the audience on how loved Komachi was in the past, with one memorable line being ‘Although I am a woman I still feel something inside for Komachi,’ mocking traditional views on homosexuality and relationships. Dancing from the chorus segmented the play well, as without their musical interludes it would have been an extremely script heavy play, as conversation on stage was only between the poet and Komachi.

The second play performed was Hanjo, a story of loss, waiting and unrequited love. We learn about Hanako, a former geisha who was bought out of her contract by an artist whom she now lives with. Hanako waits every day at the train station for her former lover Yoshio who she believes will return to her one day. The story begins with the artist, Jitsuko, played by Nadya Deborgoski, angrily reacting to a newspaper article that has been published about Hanako. Similar to the poet character, I disliked the artist. Deborgoski reflected the character’s controlling and obsessive nature so well that while watching I detested the artist for keeping Hanako a prisoner. Maria Yanagisawa who played the role of Hanako was a delight to watch, embodying the role of a girl who has lost her mind due to unrequited love. Her wistful voice and airy movements made it impossible for the audience to dislike her. Jitsuko’s one redeeming quality was her love for Hanako. When planning to take Hanako away on a trip, to hide her from the backlash of the published article, she hastily throws her own belongings in a suitcase while folding Hanako’s clothes carefully. These small touches allowed the audience to see how much this character cared for Hanako. The play has no happy ending, unless you consider Jitsuko’s win-by-default a happy ending.

In terms of props, an empty picture frame was used as a mirror, where Jitsuko brushed Hanako’s hair, so that when Hanako sat down, to the audience it looked like Hanako was the picture. I loved this imagery, as Jitsuko herself is an artist who has painted many pictures of Hanako, this use of a prop worked wonderfully. The play is set all in one room so there were no scene changes. Unlike in Sobato Komachi, where the chorus danced and the characters were dynamic, this play was quite still. It seemed to me that because of this, lighting techniques were used instead to change the tone or to highlight which characters were of the most importance. The effectiveness of the lightness was at times questionable. The lighting queues were rushed, resulting in them being distracting rather than complimentary.

My favourite of the two plays was Hanjo. Feeling slightly more rehearsed, I enjoyed the complexity of the character of Jitsuko. In Sobato Komachi, there was no mystery to the plot, from the beginning Komachi told us that the poet would die if he were to call her beautiful and it seemed inevitable to me that he would choose this fate. In Hanjo, there was more at stake; more love to be gained or a bigger loss to suffer. Both plays had similar themes of love, death and loss which linked them together. It made sense to me that the plays would be paired together and watched back-to-back. The dialogue ran like poetry and swept the audience away; it was only upon reflection afterwards that I noticed the lessons and themes that tie them all together.