Fast forward to after the performance. I went home and listen to a bulk of Waits tunes. His voice is raspy, husky and at times, a parody of himself. He is eccentric, eclectic and comedic. He is gospel, and blues, and jazz, and bluegrass and folk. He is strange and yet, a skilled entertainer. 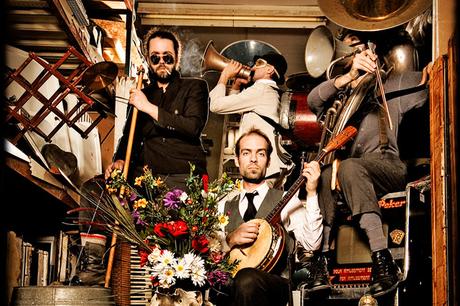 I’ll be the first to admit I’ve never heard the musical musings of Tom Waits. In fact, I don’t think I could pick him out of a police line-up. It makes sense then that I decide to see L’Orchestre d’Hommes-Orchestres cover his albums at The Cultch on March 21st. (I’m just riddled with logic these days.)

So, why go to a show when you’re clueless on the artists’ inspiration? Well, here’s where the power of marketing comes into play (it’s all about the posters).

Fast forward to after the performance. I went home and listen to a bulk of Waits tunes. His voice is raspy, husky and at times, a parody of himself. He is eccentric, eclectic and comedic. He is gospel, blues, jazz, bluegrass and folk wrapped all into one. He is strange and yet, a skilled entertainer.

Ok, back to the show. I gulp back my glass of white wine and take my seat in the theatre. The stage is littered with vintage finds: toddler rubber boots, a turn-dial TV, latched suitcases, washing boards—and the more unusual gas mask, and turkey baster: A mishmash of homemade music-machines, set design trinkets and elements I have yet to understand how they will be used.

Meet our six performers: Bruno Bouchard, Simon Drouin, Simon Elmaleh, Jasmin Cloutier, Danya Ortmann, and Gabrielle Bouthillier. Our frontman, Bouchard, is (as I find out later on in the evening) a mirror image of Waits—but with a unique twist.

He goes beyond odd and presents a character of himself, of T.W., which is both captivating and hilarious. He taps on the snare, plays violin, sing vocals and leads us on our musical adventure. The Simons are equally mesmerizing as they strum hand saws and box drum sets.

Cloutier accompanies on the acoustic and electric guitar—oh, and the banjo. With a bowed head, he gracefully plucks, with the occasional solo. Our ladies, Ortmann and Bouthillier, are magnificent. At first, they are peripheral mute models—their cluck-cluck yodel and theatricality are superb. In fact, the whole production is a feast for the eyes and the ears. Everything is purposeful and timed perfectly. I’m drawn to all six performers, which makes for a great ensemble.

So why didn’t I bother to listen to Waits before heading to the show? I wanted to see if a well-designed poster and word of mouth is enough to entice me to see a performance. And if the projected visual concept—that is, a carnival-like cast of directors, laugh-makers, audio-visual artists, vocalists and musicians—can deliver on an aesthetic (with its own clever spin) regardless of me knowing the musical genre to be played or its artistic inspiration.

Just as the poster conveyed, the show is experimental, explorative and theatrically brilliant. I dare not say anymore—better you get lost in the details.

L’Orchestre is on tour!