“His life was gentle, and the elements

So mixed in him that Nature might stand up 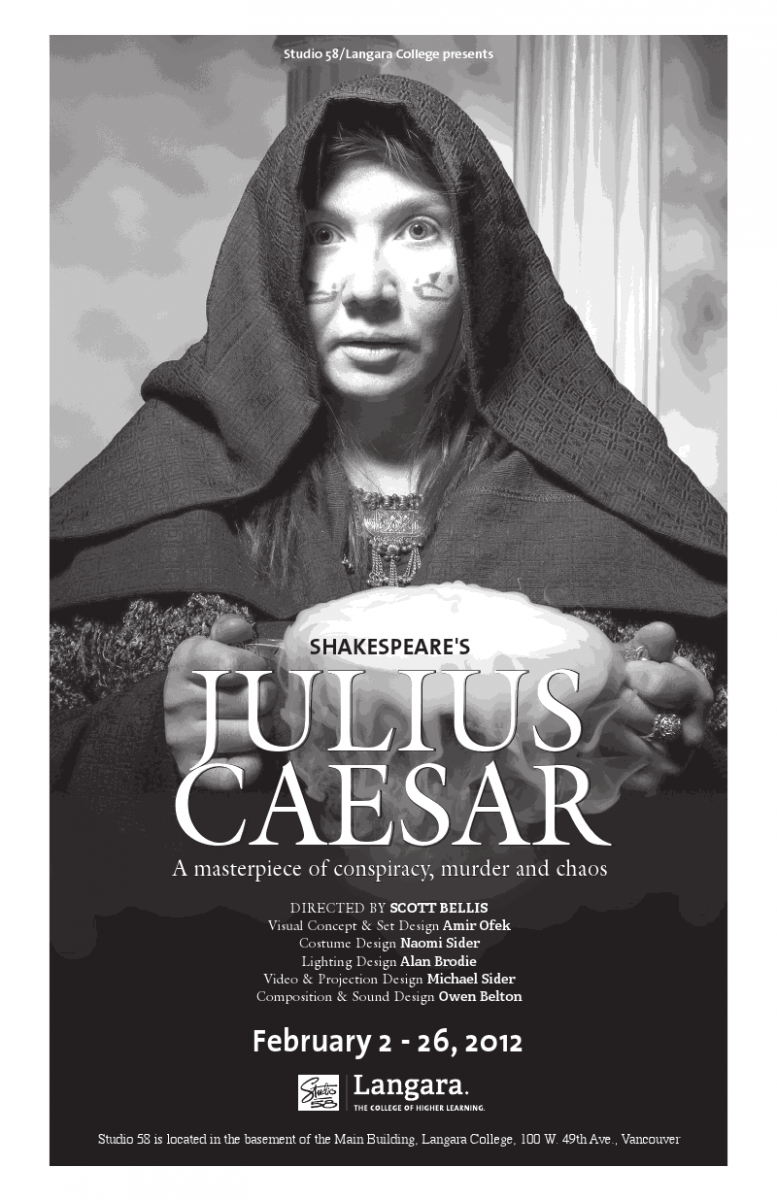 Julius Caesar. Packed full of symbolism, mysticism, greed, loyalty and all that jazz—it’s no wonder the play is a staple in any high school English classroom, let alone the stage. And again, no surprise then that Langara College’s Studio 58 decided to present the Shakespearean tragedy as part of its 2012 season. That is, with a twist.

The play boasts 44 roles, two of which are female: Portia (wife of Brutus) and Calpurnia (wife of Caesar). Limited acting potential for a cast primarily made of women (10 to six men). The quick fix? Let the actors audition for any role, regardless of gender—and to the best player go the part.

Seems reasonable. Shakespeare was well known for his all-male casting. But at Studio 58 what I believe to be a woman playing a man is in fact a woman playing a male lead as a woman. Um, ok. I don’t get this until the Q&A—a confusing element for most of the performance. (I’ll come back to this point in just a second.)

Clearly Julius Caesar is no walk in the park. Not only must an actor account for the historical and socio-cultural context of the piece, but the technically-challenging prose and its intended delivery. With such rich text, it is imperative an actor listen, not only to what he is saying, but what is being said around him. Pacing, action, reaction, theatricality---are all key to bringing Shakespeare from paper to life.

While I commend the performers for tackling such a hard piece, the performance was a little rough around the edges. Caesar (Leslie Dos Remedios) was commanding and strong, but at times, neither stoic nor authentic in her powers, coming across as more masculine than not. Same goes for Brutus (Andrea Houssin). While she delivered her lines with ease, there seemed to be a lack of connection to the text. Cassius (Linsday Winch) was more dynamic but again, reciting the prose is half the battle. I was looking for more punch. More acting and reacting. More engagement with the words and how they translate beyond the page onto the stage. Casca (Kazz Leskard) had stage presence but there were moments when his intonation and expression appeared more modern and outside the historical context of the play. Whether this was deliberant stands to be known. Mark Antony (Tim Carlson) was at his best when amongst other players. Rebuttals were, by far, the actors’ strong suit. But even then, there appeared to be a sense of urgency in delivering the next line, almost too quick. I call for more time to flush out the text. Shakespeare shouldn’t be rushed.

Now, that’s not to say the play is without merit. The actors were present and did engage amongst each other. What remains though is an overly ambitious portrayal of Julius Caesar with a less than clear gender-bending production.

Following the play was a Q&A in which five of the actors greeted a small crowd to answer our questions. I get right on the topic of women playing male leads. Why? Marketing material in the hallway outside the theatre leads one to believe it is a throw-back to Shakespearean times, when men played women. Or, better yet, a commentary on male-dominated roles in the theatre. I think it is neither of these. And as we are invited to learn, the fact women played Caesar, Brutus and the like, is not in an attempt to create more equality in terms of gender representation on the stage or beyond, but a logistical fix to having too many women in a theatrical cast. A possible nod to fellas acting as ladies? I can’t see the link.

I’m told that the women playing traditional male roles aren’t in fact supposed to be men, but women. Caesar, Brutus, Cassius, Octavius—these characters are acted by women and are now women. What? While there were she and her references throughout the play, the consistent use of sir in addressing the characters was confusing. Sir and lord are titles of status, therefore they were unchanged in this non-traditional approach to Julius Caesar. I understand the attempt to spread the wealth. Why be limited to two female parts when the rest are depicted by men. But why the gender-bender to the nth degree? Julius Caesar is a dramatization of actual events, drawing upon ancient Rome and the lives of historical figures as the source of its plot and characters. Why have it then that women play men but are in fact women acting like men? I’m game for mixing the pot. Necessity is the mother of invention. Sure. But changing the historical context of the play makes it more of a Julia than a Julius, and not any better at that.

Back in the day, men played female roles out of necessity. It was deemed immodest and scandalous for a woman to parade about on the stage. Fair? No. But that’s history for you. That’s how things were. To present a play whereby women play men out of necessity is not discriminating. It simply is. To have women, though, play men as women but act as men, is something else. I would have liked to see some innovation here. Take it to the next level. Change the story line. Change the characters. Change something, so that the modifications are clear. Spell it out in the program, so it’s black and white.

That aside, having two women kiss on stage as women is no more a nod to Shakespeare than it is destroying theatrical gender stereotypes. If anything, two women kissing is much more sexualized than two men doing the same. Does this mean the world is unjust and that men masquerading with pony tails and beards are funnier than females traipsing around with swords and military garb? Maybe. But this isn’t really a platform for squashing sexism or feminism, or pushing role-equality.

Don’t get me wrong, I’m all for pushing boundaries and thinking outside the box. But to sell it, there needed to be more. If anything, it seemed like the logistical adaptation trumped any attempts at theatrical originality.

Director Scott Bellis notes that “[i]n this alternate telling, we are discovering what it means for a male Mark Antony to avenge a female Caesar; what a same-sex marriage looks like in the house of Brutus; and how being a ’man’ can say more about your social status than your gender in this very different vision of Rome.”

An ambitious effort but in need of greater theatricality and a revision (if not greater clarity) with respect to its gender-bending ways.