Only two months into the year and another gem hits the Vancouver stage. Only this time ‘round it is a retake on the classic The Hunchback of Notre-Dame. 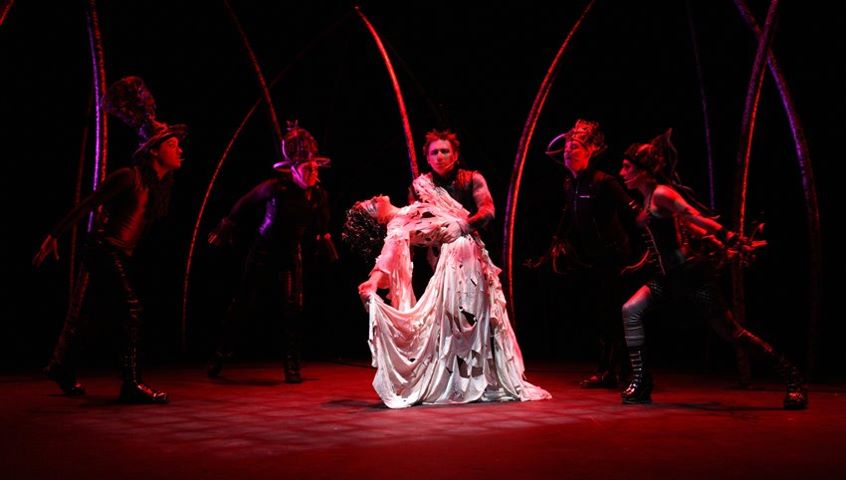 “It could have been different. She had a choice.”

Only two months into the year and another gem hits the Vancouver stage. Only this time ‘round it is a retake on the classic The Hunchback of Notre-Dame.

Written by Victor Hugo in 1831, the novel explores the human condition: greed, selfishness, faith, empathy, jealousy, and the grittier side of love. The prized La Esmeralda, our lady of the streets, is caught in a tangled mess of desire three men. Claude Frollo, the Archdeacon of Notre Dame Cathedral is blinded by obsession. Captain Phoebus de Chateaupers is infatuated but fickle and Quasimodo, a kind soul, seeks to protect. In fact, despite his outwardly disfigurement, he is a true beauty and love personified.

This is a tale of contrast and great humanity and one executed brilliantly by the cast and crew of Edmonton’s Catalyst Theatre.

Originally commissioned by the Citadel Theatre, and co-presented by the Vancouver Playhouse Theatre Company and the Cultch, Hunchback is truely breathtaking.

The piece is imaginative, creative, esthetically beautiful, and a real sensory-overload. From the choice of music (a meld of electronic, drums and strings), costumes and song lyrics, to lighting and sound design—Hunchback is a marvel.

Like all theatre performances I attend, I stay clear of the press kit before the show. I want to come to the piece with an open mind, and more importantly, a sense of wonder. Just before curtain call, our emcees (Max Reimer and Jeff Schulz of the Playhouse and Heather Redfern of the Cultch) animatedly announce that this is no traditional telling of the Hugo classic and we’re in for a ride. They were dead on.

The music is modern, edgy, and perfectly suited to the mood on stage.  The costumes are really innovative and fresh too. Picture the Broadway musical Cats meets punk meets Goth meets Edward Scissorhands. The lyrics are dark, deep and sung with tempo in mind and the lighting and sound design were the icing on the cake.

Now the cast…where do I start? Ron Pederson as Quasimodo is effortless. Scott Walters as Claude Frollo (and Clopin Trouillefou) is by far one of my favourites. His voice, his confliction and his affliction were brilliantly executed. He has the look and feel of the tormented and tormenting priest.

La Esmeralda (Ava Jane Markus) is sexy, flirtatious, heartbreaking all rolled into one. Andrew Cohen as Phoebus is brute, bold and devastatingly selfish. He is not the best dancer, but I don’t think this hurt his performance. Our comedic elements, Fleur-de-Lis (Molly Flood) and La Falourdel (Beth Graham), are also exquisitely played.

Jehan du Moulin (Robert Markus) is animated and reckless. I would have liked to hear him hit higher notes, but overall, his performance was solid. And last but not least, Jeremy Baumung (Pierre Gringoire) carries the musical from start to finish. From his subtle body twitches, to his voice and narrative prowess, I was drawn to him throughout the piece and even more to the human moments between the performers. The timing, the emotion, the reactions and actions were top-notch.

The choreography showcases great originality. Minus a few out of synch moments, the production was captivating. If I have to be picky, the flogging scene, with the lights going up and down, and the music interludes, I could do without. Not to mention the scene when Quasimodo drinks the water offered by Esmeralda. The suckling baby noises were a little distracting and at two and a half hours, it was a little long.

That said, by far one of the most original, and boundary-pushing musicals I’ve seen. It was so intriguing that I am considering packing up and going to Edmonton to see more of Catalyst Theatre.

Hunchback plays at the Vancouver Playhouse until March 10th. For tickets and more info, visit: http://www.vancouverplayhouse.com/current-season/2011/catalyst-theatres-....

Radio Goethe
What you will hear:
Music from Germany, Austria & Switzerland

A diverse non-commercial music mix from Germany, Austria and Switzerland, including independent and unreleased music in all genres. Including old Kraftwerk and Faust to more modern electronic music from the current Hamburg and Berlin scene, to medieval music, rock, Industrial, EBM, pop music...