Notable also was the stage set up, with Pierce off-right, not facing the crowd, but instead facing centre almost in conductor mode with the other musicians around him watching his lead. 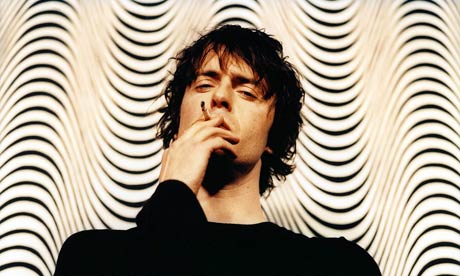 Attending the Rickshaw Theatre these days, one certainly has to be impressed with the renovations and alterations made to accommodate a vast array of artists.

On this particular night shoegaze pioneers Spiritualized were in town to display their spacey + psychedelic sounds; many of them from their new LP Sweet Heart Sweet Light.

With doors scheduled to open at 8, I arrived a half hour later to find not much of a lineup out front.  But once inside I was pleasantly surprised to see a steady stream of music fans gathering within the confines to see a band back from a bit of a hiatus.

Initially we were greeted to soloist Nikki Lane who was clad in classic roaring 20’s look with black ankle length dress, semi-scuffed pointy boots, & a black and rose patterned frilly top.  With southern charm and a dose of reality at being a “starving artist”, she advised us that this was disappointingly her last night on tour. She went on to explain she loved every minute of it and she is pleased with how the Canadian border delays seem to be so much better these days.

She also let us know that she hails from Nashville and was blessed to be playing with Spiritualized front-man Jason Pierce’s hollow-body orange Fender Telecaster that evening. What sweet vocal and guitar sounds Lake put forth for this crowd too; promoting songs from her latest LP entitled: Walk of Shame and her previous Gone Gone Gone.  My impression was that onlookers seemed pleasantly pleased with her 10 song set.

Spiritualized took the stage a half hour later, greeting us with a smoky dry ice haze and a white rear projector screen.  The canvas soon displayed a spectral mix of colours and kaleidoscope patterns of distant stars, floating to the beat of the opening opus “Hey Jane” (the longest track and first single) from the new LP Sweet Heart Sweet Light.  Initially intended to be titled Huh? and still carrying that moniker on the front of the album.

Other new tunes included: “Heading for the Top” “I Am What I Am” “Mary” and the wonderful “So Long You Pretty Thing” (which lead the encore).  With titles like this and considering some of the health problems Pierce has endured over the last couple of years, I had to wonder about his continued inspirational thoughts on religion and the afterlife.

Notable also was the stage set up, with Pierce off-right, not facing the crowd, but instead facing centre almost in conductor mode with the other musicians around him watching his lead.  Possibly illustrating that he remains the only constant since formation of the band in the early 90’s from the ashes of his former one: Spacemen 3.

Sprinkles from other records were displayed, but those from Amazing Grace and Ladies and Gentlemen…We Are Floating in Space dominated the older material.  Including:  “She Kissed Me” (former) and “Come Together” (latter) prior to a roaring final encore of “Cop Shoot Cop”.