By all rights San Francisco/Oakland based indie rockers Rogue Wave should not even exist in the year 2013.  This band has been through such heartache and turmoil since their inception that likely no one would blame them if they packed it in and called it a day.  The fact that they still do have a pulse speaks to their collective passion and desire to play music; and with such hype and brightness, that early on they were often considered northern California’s answer to similar Lo-Fi darlings Built to Spill and Modest Mouse. 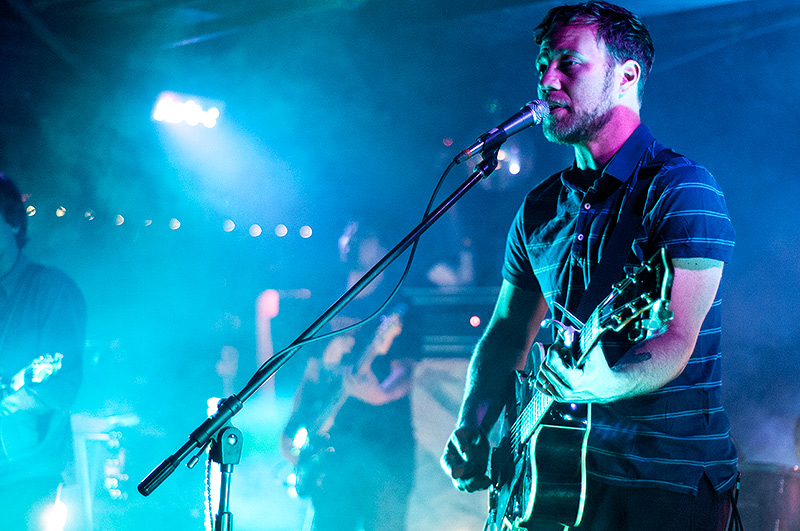 After such catastrophic band losses including kidney disease, death, and unexplained label dismissal, it’s hard to fathom how they are still touring, writing and recording.  Only 2 original members now remain from the early years, drummer Pat Spurgeon and singer/songwriter/guitarist Zack Rogue; and those of us in attendance anticipated their arrival with delight.  I was one of the first inside when there were only about a dozen souls on hand.  Everyone seemed to be enjoying themselves socializing with friends or checking out the merchandise table.

This was filled predominantly with various items from opening act Hey Marseilles.  The Seattle based septet took to the stage as the house continued to swell along with the dance floor and stage-front.  In town to promote their new record Lines We Trace, the stage setup included drums (Colin Richey) at stage right and the rest of the crew spread out along the front including founders Nick Ward (vocals) and Matt Bishop (guitar) as well as multi-instrumentalist Patrick Brannon (violin, bass etc.)  Opening their set was “Demian” the last track on the new release which had a haunting deep cello (Samuel Anderson) and piano (Phillip Kobernick) lead in.  Next was the title cut from their 2010’s To Travels & Trunks.  The rest of their songs were evenly spread with four from the new record: “Heart Beats” “Dead of Night” “Elegy” and “Bright Stars Burning” and four from the old: “Gasworks” “Cannonballs” “Rio” and set closer the eclectic “From a Terrace”.

The headliner also has a new release Nightingale Floors and no less than four cuts were sprinkled into the set-list.  “Siren’s Song” “S(a)tan” “Figured it Out” and “College” were all delivered with rich fullness.  Openers “Every Moment” and “Nourishment Nation” were similarly the first two songs taken from their well received debut 2004’s Out of the Shadow.  An unanticipated five made it from 2007’s Asleep at Heaven’s Gate, including the last two in the entire set “Lake Michigan” and the bright and poppy “Harmonium”.  “Cheaper than Therapy” from that release was the first tune of the encore and 2005’s Descended Like Vultures brought forth “Love’s Lost Guarantee” and “Publish My Love” along with show closer the summery/dreamy “California”.  The house was likely ¾ full and those lucky enough to be in attendance were treated to one of indie music’s true adversarial warriors; a band who simply refuses to back down and call it quits.

Photos by Jen Leung via The Snipe