Music Waste is one of the most exciting weekends of the year for fans of Vancouver’s local arts scene. It’s a long-running festival that boasts a tradition of featuring some of the city’s best local independent and DIY musicians, comics and visual artists in venues across the city. This year, over 100 musicians played sets for the festival, and with tickets for each show costing a mere $5 (as always), it was no challenge to get great bang for your buck. 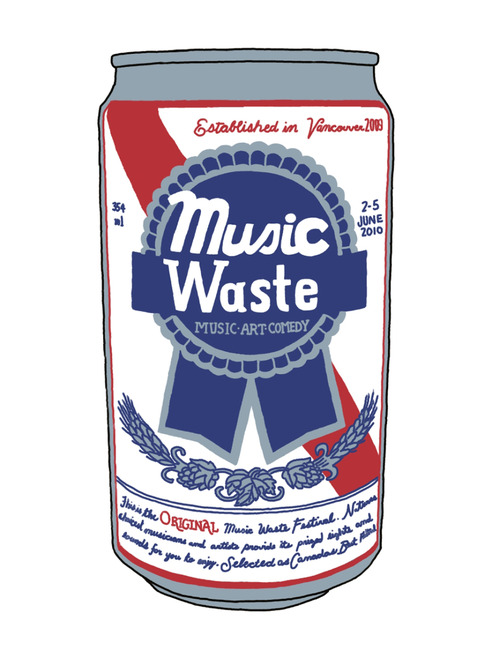 Thursday night highlights included Bad Channels and B-Lines. B-Lines’ frontman Ryan Dyck was a revelation, staring out at the audience like a man possessed, screams and shouts threatening to tear his vocal cords as he jumped on and off the stage into the frenzied crowd. Throwing himself into the performance with reckless abandon, Dyck provided perfect foreshadowing for the exhilarating and exhausting weekend to come.

Friday featured the largest show of the festival at the Rickshaw Theatre, where the night started with Hermetic, The Courtneys and Apollo Ghosts. Living up to its billing as the premiere event of the festival, the bands’ performances were all spot on, to the delight of the sizeable crowd peppered with local music celebrities - from one of the Quin sisters to members of other Music Waste bands.

But even at the largest show of the weekend, the relationship between fan and performer was amiable and familiar. Throughout the weekend, bands cheerfully responded to shouts of “What’s your band called,” joked with members of the audience and, in the case of Apollo Ghosts’ Jay Arner, invited them past the metal barricade to get up close and personal.

I always look forward to the in-store performances that make up Music Waste’s Saturday Afternoon programming, as they’re a refreshing change from the club shows that make up the majority of the festival and Vancouver’s concert circuit. It’s fun to watch curious window shoppers peer in from the street, often as flabbergasted as they are interested, or to thumb through crates of old records between acts instead of idly standing around.

After a late night on Friday, the crowds at Saturday’s daytime shows were understandably subdued, but no less attentive. Even with the potential distraction of thousands of records, movies and comic books, as soon as each band started playing, focus shifted from the consumables to the musicians, who were stellar.

While the daytime shows made for a relaxed, sunny afternoon spent walking up and down Main Street, Saturday night was a different beast altogether. A whirlwind string of must-see sets had me and my friend Jamie biking halfway across the city. We traveled from the Biltmore to LanaLou’s to see Slam Dunk, Eeek! and Sightlines, then hit the Astoria to catch the New Values and finally reached 360 Glen, where Johnny De Courcy was just getting things started well after 2am.

By the time Weed’s set started Sunday afternoon at the Waldorf, the sun had come out and hungover Music Wasters were beginning to pack the area in front of the stage for one last kick at the can. The noisy, fuzzed-out four piece were the perfect reminder of the ideal that lies at the heart of Music Waste: It’s not how polished or popular your band is that matters, it’s how much you love playing in it.

Because Music Waste has always focused on being a celebration of Vancouver’s local independent artists instead of a tool for promotion and profit, the atmosphere is amicable and welcoming as everyone looks to just have a good time. It’s one of the characteristics that makes Vancouver’s local music sphere so exciting on a regular weekend, and was dialed up to 11 for the scene’s biggest to-do of the year.