I saw B-lines, Spectres, and the Danish group Iceage play at the Biltmore on March 20th. It was everything I expected, and that’s that. 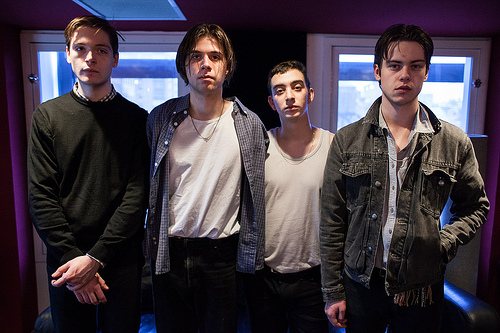 The Biltmore was not very busy for the first two bands, housing roughly the same forty people one always sees at a B-lines show. However, when I took a look around after Iceage’s first tune I was definitely impressed by the audience’s size for a Wednesday show. People definitely seemed more curious than excited for Iceage.

B-lines played first, running through a typical fun and spastic set. I heard a while ago they were finished playing shows, so after that scare I’m constantly reminding myself to be thankful for their positive punk presence and influence here in Vancouver.

Spectres were Joy Division. They were all trebly guitars, completely put together, dark and brooding, and much different than B-lines. It was not really my cup of tea but if you always thought Vancouver’s punk scene could use more Modern English, I found your group.

My first thought about Iceage was just how moody they seemed. Not that that’s a bad thing; after missing their last show in Vancouver I read a lot of reviews and watched a lot of their live performances online and I can confirm moodiness is something these guys have come to be known for. People eat that stuff up, or at least the crowd at the Biltmore seemed to. Personally, I love Elias Bender Rønnenfelt’s deep voice. I love the messy guitars. I love how the band could get a sleepy Vancouver audience going even though it was a Wednesday and there was absolutely no one who seemed to want to get bloody and black-out.

I think the boys’ ages definitely work in their advantage. They’re really doing nothing new, and really are not one of the most amazing or intense punk groups of the past few years; however, their ability to project a completely perfected youthful sneer, confirmed to me now both through their records and their live show, while still actually youth is very attention worthy. The show was quick, as most punk shows are. Elias just told the audience the name of each song, and then they played straight through them with no added live bonus sounds or screams. They didn’t play much off New Brigade, but that was expected too.

I enjoyed my night and left secretly hoping Iceage doesn’t get too much bigger because they seem to be attracting a fitting crowd by being both a big-deal worthy group and bleeding out very intimate angst. They definitely didn’t do anything more than make a decent performance out of that one familiar seething youthful feeling but everyone at Wednesday’ show seemed to be satisfied by it: myself included.

Anaerda TV
What you will hear:
TV & web series reviews and recommendations.