Gabba Gabba Hey: A Retrospect on the Ramones in Vancouver 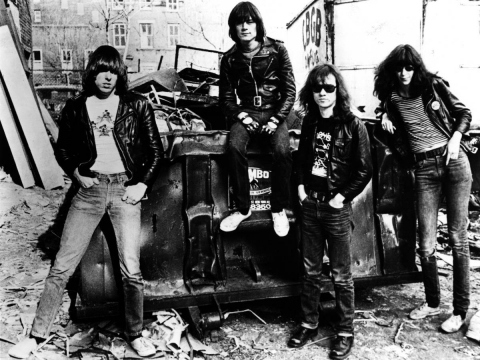 The late-Sex Pistol bassist Sid Vicious once quipped “everything is bollocks apart from The Ramones” and in the early spring of 1980 I tended to agree with him.

I was hanging at the University of British Columbia volunteering at their campus radio station CiTR. I filed records, fumbled my way through the odd news/sports cast and spun some delicious vinyl. Musically, it was an exciting time in Vancouver as the independent scene was flourishing and many upstart international acts were sliding through town. Local bands like DOA, The K-tels and The Subhumans were creating their own Van City chaos and would often support groups like The Clash as they toured the west coast.

One afternoon, the promotions coordinator for the station mentioned that “some punk outfit from New York” was playing the Sub Ballroom that evening and asked if I  would be interested in getting on the guest list. The band in question was The Ramones and I quickly responded with a "hell yeah!" Their (Phil Spector produced) album End of the Century had been recently released and the track "Do You Remember Rock ‘n’ Roll Radio?” was receiving a fair bit of airplay on CiTR. Through the magic of the internet and the meticulous tour records kept, I’ve pinpointed the exact date of the show — April 21, 1980.

I showed up at the venue early to catch the opening band begin the festivities. The opener, The Dishrags, were a highly-touted all-female power-punk trio (a rarity in those days) originally from Victoria and featured the mysteriously intoxicating Jade Blade on vocals and guitars. They began the evening with a solid set and I clearly recall a spirited version of their classic ditty, "Love is Shit" (so romantic).

Shortly thereafter, the lights dimmed to the theme from Clint Eastwood’s 1966 spaghetti western, The Good, the Bad and the Ugly blaring from the PA speakers. The headliners promptly hit the somewhat sparse stage that featured a large Ramones banner (emblazoned with their classic logo) hastily draped behind the rickety drum riser. Lanky crooner and band leader Joey Ramone appeared to be at least 7 feet tall as his long mass of dark hair nodded to the crowd. Johnny, sporting his signature black leather motorcycle jacket, held his Mosrite guitar like a machine gun in waiting. Marky, in his muscle-tee, took his place behind the drum kit, while principle lyricist Dee Dee had his white Fender bass slung down low and ready to go as he hopped toward the mic and screamed “1234!”… Johnny unleashed his first of many high caliber power chords spraying the audience with musical-note-projectiles as the supersonic assault exploded toward the audience. The songs were fast, furious and came in manic succession. With song titles like “Sheena is a Punk Rocker”, “Commando” and “I Wanna be Sedated” the tunes were short and sweet (no self-indulgent guitar solos need apply).

As I stood gingerly to the side of the long, narrow, sweaty venue I planned my escape route as I was certain a near riot was surely moments away… I had no way of realizing this at that particular moment, but, this band of misfits from Queens New York planted a seed that helped changed the perception of what Rock music should and could be. Trouser Press once claimed “The Ramones blasted open the clogged arteries of mid-70’s Rock.” It goes without saying that many arteries, including mine, were unclogged that fateful evening.

The Ramones would go on to play Vancouver several more times over the years, but this was my first and last trip to Ramonesland. In fact the band toured relentlessly over their 20+ year career leaving a trail of fresh punk bands popping up in the cities they had visited along the way. The Ramones created a smattering of unrest in their aftermath from Vancouver to New York to London and all points in between. By the mid-90’s the end was near as they released their 14th and final studio album appropriately called Adios Amigos in 1995. The constant touring, the lack of chart success and dissention between band members dictated that it was time shut it down. In a career that spanned 2,263 shows The Ramones played their last gig on August 6, 1996 at the Palace in Hollywood, California.

Looking back I feel lucky to have witnessed at least one of those shows from the group that was right there at the epicenter of punk. In many ways, their lives and career echoed one of their finely crafted 2 minute singles: fast, furious, uncompromising, saturated with unbridled energy and passion, then a fast fade.

Sadly by 2014 all 4 original members had passed away, so there will be no “getting the band back together” or reunion tours here. But maybe it’s just as well as youthful angst, fury and rebellion is never quite as glorious the second time around.