After a skilled, but seemingly weary set from openers Hundred Dollars, the crowd was eager to see the Ontarian roots trio perform their unique blend of rock, country, and folk live. Finally, the blinds covered the large windows overlooking Granville street, the lights dimmed, the obnoxious Rogers sponsored projections of upcoming shows and the Gaslight Anthem Song faded out as an odd trio of gentlemen took to the stage at exactly 10:30. 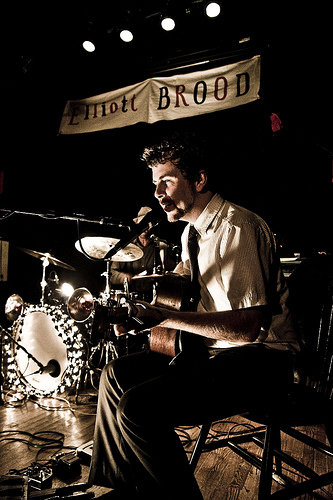 Fedora sporting, mustached, Newmarket, Ontario native Stephen Pitkin took to the drum kit as his Windsor born band mates – Mark Sasso on lead vocals and Casey La Foret on backing vocals assumed their places. Both Sasso and La Foret play an array of string instruments including guitar, banjo, and ukulele – lending to the band’s unique take on traditional Canadian folk music. The group starts out with a searing instrumental that epitomizes their harmony, country leanings, rock vibe, and spine-tingling skill.

“I can’t believe we’re playing the same night as Dan Mangan, and we’re selling out here!” Steve expressed his own disbelief at the energy that had built in the concert hall. As the band resumed playing, heavyset security guards barrel through the crowd to pull down girls who had found themselves on top of shoulders.

Elliott Brood performed Northern Air, and as they sang about smoke wasping through the trees, a mysterious, thick smoke forms around the stage’s backdrop of bare branched trees. “We’ve been through a lot of stuff,” Steve explains “now we’re getting to the meat. The steak sounds like this;”

The group launches into a rendition of the track that had first introduced them to Canada back in 2004. The British Columbian crowd was ecstatic to hear the Ontarian band sing about BC’s neighbor, as well as the countrywide geography in the song. Although Southern Ontario has impressed a particular flavor upon the three men, there is something inherently Canadian about the banjos, ukuleles, lyrics, and crescendos of the group.

“I have an album cover with Neil Young and it looks like this,” Steve states, still not seeming to appear to believe the size and energy of the concert. “Thanks for making this happen!”

The group begins with Valley Town, then Home, before Steve informs the audience that “We have more jumping songs,” and followed up with the staccato moving Write it All Down for You. Somehow, although outfitted with the same instruments as many country and rock musicians before them, Elliott Brood captures an urgency – an urgency that renders the Vancouverites incapable of resisting the urge to move.

As Elliott Brood returns for a midnight encore, girls once again find themselves astride shoulders of partners, and the once ever-present bouncers seemed to disappear as that sweet smelling smoke formed a visible cloud by the stage. Elliott Brood delivered exactly what the audiences was hungry for – a foot stomping, Bic-wielding answer to the cookie-cutter rock and overpriced ticket sales that alienate instead of inspire people. People who listen to Neil Young, and don’t mind the twang of a banjo.