CJSF volunteer, Tamara Lee, attends and reviews Elfin Sadle at Oppenheimer Park on August 2,2009. Tamara weaves an interesting tale about the musical makings of this duo from Vancouver Island. 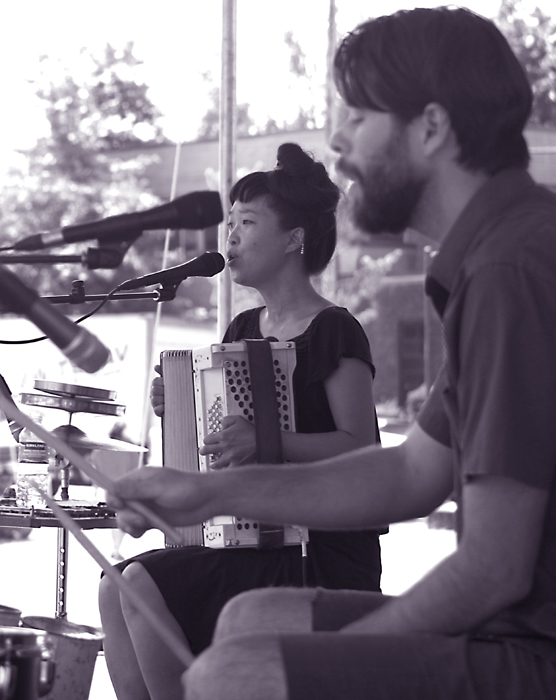 Well, Elfin Saddle (being the strange name of a band) brings to us strange and unparalleled music with such powerful oddness that we might be wise to check our pacemaker batteries before listening. This may be overly dramatic, yet an attempt to describe them with an equal level of potency that their music brings. Yes, highly characterized, emotional and unique; Elfin Saddle really is worthy of the drama.

Their exceptional quality is the symphony of sound that they manage to create from a tiny core band of just two people. Both of the founding members, Emi Honda and Jordan McKenzie play a plethora of instruments, while extraordinarily managing to play several at once. Also, just to take things one extra mile, the instruments are hugely unconventional, including accordions, banjos, xylophones, ukuleles and every other rare instrument that I can’t spell. The “drum set” includes symbols that look like metal bowls and drums that might be empty food cans. They even play a wood saw on several songs, adding yet another notch to the strangeness scale.

Their audience cannot help but be mesmerized watching Honda bang a tambourine with her foot, sing into a microphone and squeeze breath in and out of her accordion, all with a focus that couldn’t be more precise than if she were a robot. McKenzie is equally as engaging; exposing his spirit through the many instruments surrounding him, his only protection for his otherwise naked soul. The musical result has hypnotic powers that astound the audience to silence. Quite indefinable, the sounds register somewhere from folk meets traditional Japanese meets medieval tavern music. Each song paints a colourful picture and tells an emotional story that can be understood whether they are singing in Japanese or English.

One song that stands out in particular is “The Ocean.” Honda explains that it is about the distressed sea life that is being poisoned by mankind. Having lived near to the ocean her entire life (in Japan and later in Victoria) these issues are very close to her heart. This is endearingly clear as she sings the story with a soft innocence therby transcending the language barrier.

McKenzie has a very different style when he takes vocal lead. He brings a grass roots component to the music singing with mature and longing tones. His style is hauntingly beautiful, steaming from blues origins, like the reincarnation of a slave in the cotton picking fields.

Together they compliment each other as naturally as the sun and moon. This union was originally made in Victoria where they met. Later they drove across Canada with all the small instruments and junk they could fit. Eventually, they landed in Montreal where “the Volvo fell apart and a seed was planted”. They set down roots and expanded to include Nathan Gage, who can be heard on their new album playing contrabass or tuba.

So, Elfin Saddle arrives to us today as a mixed bag of origins and influences. The result is the musical personality of a nomadic wanderer; individual and wise with worldliness, while able to adapt too many environments. Their performances range from that of their hipster counterparts Sunset Rubdown to that of a sunny afternoon show in the park at the Powell Street Festival.

No matter where you might experience them, their impact is certainly intense. People take notice like they would when any strange thing is spotted, from a UFO to a tornado. My advice: meet Elfin Saddle with an open mind. Relax, enjoy and see where you end up; it’s guaranteed to be somewhere different from where you started and things may seem a little bit stranger!

2am - Amplified Radio - Electronic Dance Music
4am - Outlaw Jamboree - Country Music
6am - On The Tracks - Americana, Roots
8am - Your Radio Show Could Be Here! - Open Slot
9am - Making Contact - Public Affairs