Since their inception, The Courtneys have always had a playful character to them. They never seemed to take themselves too seriously, a trait that has come to define their brand of slacker-pop. But after a good, solid year of suspicion, Saturday January 4th’s performance and Music Video Release Party at the Rainbow Connection on Hastings demonstrated that they are, in fact, some of the hardest working slackers in the Vancouver music. 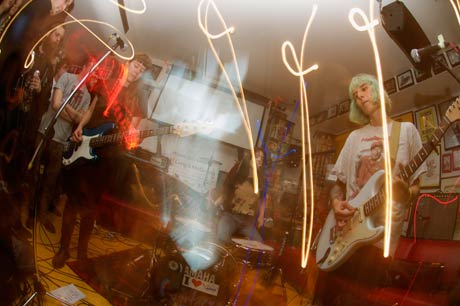 Unsurprisingly, for a band that is as well-loved as The Courtneys, the bill that filled out the party was nothing short of phenomenal. Opening the night was Woolworm (who I had to miss, regrettably), who I imagine were nothing short of spectacular. Following them were out-of-towners, So Pitted. The Seattle three-piece are a logical carryover from the grunge heyday for which the city had become famous. Relentlessly heavy, they slugged their way through a punishing set for a totally enthralled crowd that swayed fluidly amongst the drone. Despite their abrasiveness, So Pitted’s more melodic moments worked perfectly juxtaposed to the grimy vocal effects and overdriven guitars.

Now, I should point out that the packed gallery had a pretty distinct theme. The lighting scheme was fairly basic, but all of the acts played against the same backdrop: a projection of the 80’s vampire classic, The Lost Boys. This made sense, as the title of the single for which we were partying was called “Lost Boys”. Having never seen the film I was entranced by the muted visuals, as they were soundtracked by some of the best independent music of the Pacific North West. To further the union, Ryan Dyck of B-Lines fame effortlessly filled the gaps between bands, DJing almost exclusively 80s and 90s pop, punk, and grunge music.

After So Pitted, The Courtneys gathered at centre stage to present their latest video. Having previously released three high quality and philosophically appropriate videos for singles off of their 2013 self-titled LP, the expectations were understandably high. And of course, the band delivered. The video for “Lost Boys” (which, unfortunately, is not yet on the internet at the time of this post) is probably their best, and most ambitious to date. Part homage to the film from which its namesake is taken, part concert video, “Lost Boys” was creative and nostalgic as the band (as well as some familiar faces from So Pitted) wandered an amusement park at night while simultaneously dabbling in vampirism. Much like the other three videos The Courtneys have released, “Lost Boys” was totally fitting for the tone of the band.

After the video, The Lost Boys was restarted and cloaked Peace as they played drone-pop tracks off of The World is Too Much With Us and My Face. Dan Geddes monotonic sing-speak maintained the late-80s/early 90s revivalism of the evening with a clean, uncomplicated performance.

Late into the evening, The Courtneys eventually took the stage, playing the singles off of their debut record as well as cuts off of their upcoming sophomore release. By now, their slacker image had now been replaced with effortlessness as they breezed through a short, sweet, but thoroughly satisfying set. When announced that the next song “may sound a little familiar” the crowd cheered loudly, faking their way through the lyrics to ‘Lost Boys” as though it has been their favourite song for years.

While I may gripe that they didn’t play personal favourite “Delivery Boy”, or do that cute ‘opening-song-that-spells-the-name-of-the-band’ shtick that they used to, the amount of effort that went into the night was truly stupendous. These girls have rightfully earned their place amidst the top of Vancouver independent music scene and can relate their slacker-pop identity strictly to aesthetic instead of practice.

Now, all I want to do is watch a Kiefer Sutherland’s bleached mullet fight a bunch of children.