The Courtneys at the Biltmore Cabaret 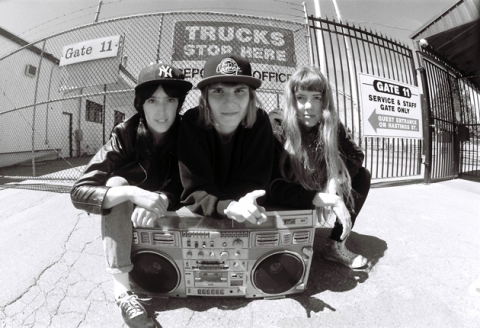 Entering the doors of Biltmore Cabaret, little did I expect it to be so cozy and people so friendly. Laughter and talks were heard from every corner. Occupying the biggest booth was the most-wanted band of the evening, The Courtneys, were selling their cool merchandise: pins, t-shirts and hoodies. Members of other bands performing, Birthday Bitch, a brand new rock band from Vancouver, Versing from Seattle, and Feels all the way from LA, were just casually walking around, giving an amazing opportunity to their fans to ask for an autograph or just say hi. All of these acts would give a relaxing vibe, which is definitely what most people are looking for on a weekday.

The first performance of the evening was given to Birthday Bitch. Despite the band being unexperienced, they did a good job opening the show. Even though guitar parts were simple and the sound of the instruments seemed to overpower the vocalist, the band seemed to be welcomed by the audience. Asking several people to share their opinion regarding the Birthday Bitch performance, I found out that they enjoyed it.

The next band performing, after the short break filled with good music set up by the DJ Tim Clapp, was Versing. Right when the band started playing their first song, the passion hit me. Clearly seen was that guys enjoy playing the music, but also interacting with the crowd. What I’d like to point out is that Versing was the only band announcing their songs. Simple, yet important thing to do, which was particularly helpful for anyone who would like to find their songs later on. Including myself. As a fan of the Black Keys, I’d recommend Seattle-based Versing to anyone who likes  good garage indie rock. Loved it!

Coming after the Versing was Feels, the punk grunge rock band from LA produced by Ty Segall himself, and featuring female vocals with fuzzy guitar and energetic drums parts. Priority of the band seems to be instrumental part, rather than the vocal and lyrics. I’d suggest to put more thought into guitar parts and focus on the performing technique. It might work for now to take the halls with the energy only, but it sure is not enough. Feels are still fairly new, so let’s just keep an eye on them!

Rocking the last hour of the show, was the performance everyone was waiting for: The Courtneys. This all-female band from Vancouver has been rocking since 2013 when they released their first self-titled album. Just recently The Courtneys released their new album called The Courtneys II, and amazingly performed the songs from it in front of the excited crowd. Folks were dancing, laughing, singing along and without doubt enjoying these amazing women rocking not only on stage, but also the dance floor in the best tradition of 90s! Congratulations to The Courtneys and best luck with their tour!

Keep on listening to CJSF 90.1 FM, we always provide you with all the information about cool events, shows and concerts. Stay awesome!