Animal Collective / Micachu and the Shapes 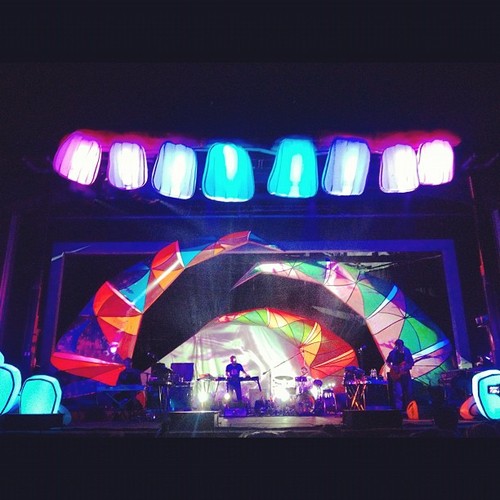 Vancouver was one of the first stops as Animal Collective hit the road to promote their first album in three years, Centipede Hz. (Vancouver tends to be one of the first or one of the last one most North American tours.) Although the new record is fresh in everyone’s heads, it is a little more unified in its sound and more harsh than the blissed out, celebratory feel of their previous (and most successful) record Merriweather Post Pavilion

I had music critic questions in my head as I walked into Malkin. Would this harsher record continue Animal Collective’s steady growth? Would veering away from the easier sounds of Merriweather satisfy fans? Either way, it was great to see the band again after three years away from making music.

In addition to the new record, the biggest treat of this tour was the return of band member Deakin.

Animal Collective tend to disappear behind their equipment on the stage, focusing on the making the music. To compensate, the band had set up the stage like a giant mouth—recalling the chorus of “Brother Sport” from Merriweather and the cover of the new record. It was an elaborate set up with glowing coloured teeth around the edges of the stage and a video display on the “throat” background above the bands heads. It was easy to lose the band among the Technicolor teeth. Only Brian Weitz aka Geologist stood out due to his trademark headlamp. I can only remember hearing from the band once when one of them remarked that this town “is incredibly lucky to have a venue like this.”

During the encore rendition of “Girls” the men from Animal Collective came out from behind their stations and danced. “Girls” was the track everyone was waiting for and everyone quickly joined the band bobbing swaying and thrashing about.

This concert was the best way to end the summer concert season. After swaying to Animal Collective, their fans collectively stumbled through the park back to civilization.