At his August 1st show at the Red Room, Escovedo showcased a number of tracks from his latest album, ‘Real Animal’, but also dipped into other works, like ‘By the Hand of the Father’, a theatrical piece, with original music, centering on the story of Escovedo’s Mexican-American father. 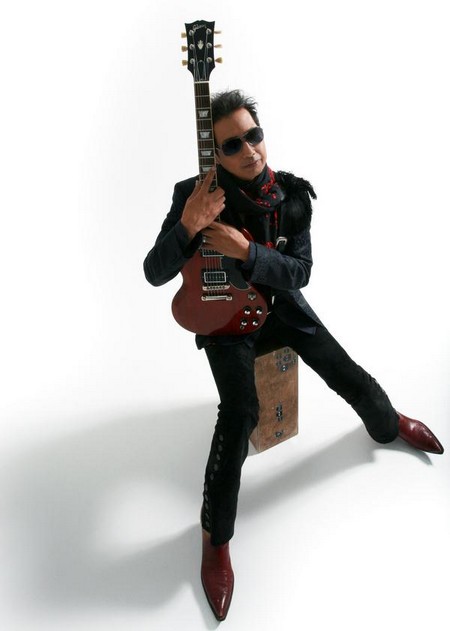 Album and set highlight ‘Sensitive Boys’ laments the past, inspired by the collaborators and friends of decades’ past. Recorded, the track is a couple of backup-vocals away from sliding into melodrama, but live the song is powerful and affective. Another show standout was ‘Castanets’, a song Escovedo refused to play for a number of years after it was revealed that it was included on the iPod of George W. Bush.

What worked so well was the concept of changing focus. A sing-along and wild guitar whipped the audience into a frenzy; a raw, emotional lyric calmed them down and drew them in. Moving from slower jams to electrifying harder rock was jarring at times, but was a perfect showcase for Escovedo’s celebrated musical diversity.

It is however, a little difficult to fault the structure of a show when the featured artist walks over to you in the front row of the audience and plays the guitar in your face. On the other hand, Mr. Escovedo, it’s unwise to give me the mic and urge me to sing along to a cover of the Stones ‘Beast of Burden’, as I will likely blank out the lyrics when put on the spot. It was not a great moment for ‘Objective Professional Reviewer’ me; a terrific moment for ‘Giddy and in Musical-Heaven Fan’ other side of me.

The band overall was great and cohesive, including the relatively new addition of bass player Bobby Daniel. Guitarist David Pulkingham in particular was captivating, combining the technical skill of a long-time pro with the disposition of an enthusiastic teenager who lives for the guitar and the audience. The easy rapport between Escovedo and drummer Hector Munoz showed a deep, decade-long friendship.

Translated well live, Escovedo’s music is that of a dreamer with the perspective of a survivor, through career and life. Earlier in the decade, Escovedo waged a severe life-threatening fight with Hepatitis C, leading to a series of benefit concerts organized by the musician’s friends to cover hefty medical bills. It’s not nostalgia or a grasping for days gone by; it’s a current, relevant and influential musician relating new ideas, and reaffirming old ones.

Alejandro Escovedo is the rare master that comes off as hopelessly internal, and introspective. Looking up at him on the stage you realize that each idea and longing lyric is effortlessly conveyed. What makes so many fans of Alejandro Escovedo breathlessly devoted is the emotional connection. You can abandon yourself in the riffs, jams, and exquisite guitar work, but it begins and ends with the songwriting. Combine this with an intimate and often playful stage presence, and it feels like seeing an old friend. It is the decades of projects, numerous bands, solo efforts, astute songwriting and an engaging performance style that makes Alejandro Escovedo an enduring and influential artist.