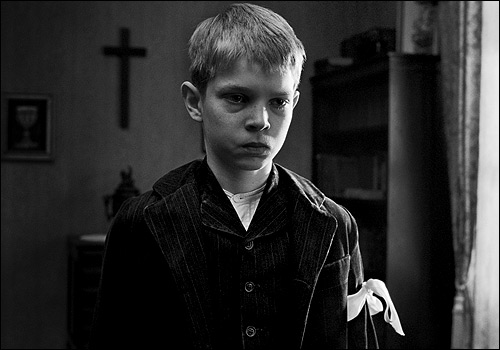 In “The White Ribbon (Das weisse Bande)”, Michael Haneke continues his exploration of human nature within modern society. Following up on his previous masterful films “Code Inconnu”, “La Pianiste”, and “Caché”, Haneke returns to his native german tongue in this provocative piece. I must confess: I don’t particularly enjoy Haneke’s films. However, there is no denying that each of his works leaves the alert viewer deep in thought, introspective, and often a little angry. This film is no exception.

The film begins with a narration of events by a man looking back several decades to his life as a schoolteacher in a small German town during the outset of the first World War. In spite of the strange events which take place in this rural town, emotions are kept bottled and controlled. Only through the unique framing of a few scenes do we glimpse the characters’ true sentiments. A society of blame prevails in the town. While a few refrain from this vice, almost all eventually succumb to speculative denunciation. Various strange occurrences beset the town, and the lines separating justice and unfounded accusation blur as the townspeople seek to justify their predicament. As the mysterious tragedies accumulate, this mood begins to transform the characters. The influential men prove to be the most corrupt, propelling their society down an ever-darker road. The white ribbon is introduced as a symbol of innocence and purity by the pastor of the town. When his children prove to be sinful in his eyes, he pins ribbons to their shirts to remind them that they have strayed from innocence. In his vehemence to indoctrinate his ideals, he consequentially sows resentment, guilt, and shame in his children. One of his sons branded with the ribbon even elects to test whether his inability to be “good” implies that God wishes his demise.

Early in the film the narrator states that the occurrences and their consequences in the town were representative of Germany’s transformations prior to the second world war: that the hatred and blame which caused the holocaust stemmed from judgmental and hateful experiences befalling German citizens. In seeking to account for the atrocities of the holocaust, the blame is placed squarely on Germany’s “childhood” around the time of the first world war.

However, those who follow Haneke’s films should realize that this is too easy an answer for a man who refuses to provide answers. The film itself becomes an allegory to the idea of man’s desire for practical resolutions, justifications, and answers. So what is Haneke’s answer to the nature of the mysterious events which take place? There are no answers, only questions.