Given that he’s best known in the media for having a fatwa against him [a price on his head] , readers of this review may not realize that Salman Rushdie is a very funny writer. Actually, that’s why he does have a fatwa against him – because his famous book The Satanic Verses is to Islam what Monty Python’s film The Life of Brian is to Christianity.

Rushdie authored the 1980 novel Midnight’s Children, on which this brand new film of the same name is based; and he adapted it for screen himself, keeping many humorous scenes and zinger  lines to chuckle at. (The film’s beginning, in which the hero’s grandfather, a doctor, meets his future wife through a hole in a sheet, is a case in point.) 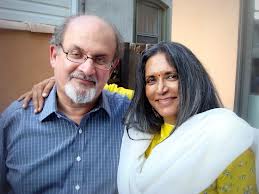 Deepa Mehta, on the other hand, is best known for serious and heart-rendingly emotional dramatic films portraying controversial aspects of life in India. That’s why she has had threats against her and roadblocks put in the way of producing some of her films there.  (Happily, she moved to Canada back in 1973, and finds support here for her artistic freedom.) Mehta is also a master of hardcore realism, while Rushdie is a dab hand at magical realism. With so much in common and such differences, the pairing between her and Rushdie has turned out splendidly.

The magical events in Midnight’s Children are all keyed to serious real events in the history of India, Pakistan, and Bangladesh over a period of about 4 years ( I agree with a fellow-theatre-goer who said he’d learned more about the history of that region in 90 minutes than he had in his whole life before.)

With a hat-tip to Mark Twain and Gilbert and Sullivan, Rushdie introduces two boys born near the stroke of midnight the day Britain ceded independence to the sub-continent.

The boys are quickly switched by the hospital nurse (under the influence of her radical boyfriend), so that the rich boy gets the poor boy’s family and vice versa.   Later, a large group of children born at just about that same moment all turn out to have extraordinary powers. They are able to communicate magically through the rich poor-boy, who has a large, magic nose (until his rich father forces him into plastic surgery to make him look like a member of the right family!)

Deepa Mehta’s skill with creating exquisite scenes of Indian lands and lives gets a tremendous workout in Midnight’s Children, as the story takes us from highest to lowest social classes, from the countryside to palatial homes, to urban slums. As events push the characters from place to place, she tracks the hero’s  hejira that is shaped like a giant cross: Kashmir to Bombay, Karachi to Dacca.

It’s impossible to convey in writing how visually rich and pleasing Midnight’s Children is. I hope you will get a chance to see it. It is showing at the Vancouver International Film Festival on October 3 at The Vogue Theatre and that will be followed soon by widespread theatrical release.

On The Tracks
What you will hear:
Americana, Roots,Rock,Soul,Blues,indie