CJSF volunteer Nick Pannu reviews the western preview of Project 2012 presented by the Tipper Restaurant, this is what he says.... 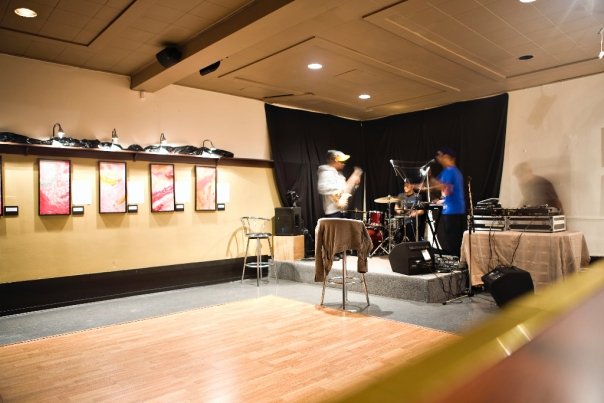 The Western Premiere of PROJECT 2012 was presented by the project series at Tipper Restaurant on 2066 Kingsway (&Victoria). Performances are scheduled from Thursday, Jan 28th until Saturday, February 6th

What would you do if you knew the world was going to end? Would you travel extensively or re-connect with your soul mate? Maybe you would live in perpetual denial until the very end; and spend all your time and resources building a safe haven.  How would those in power maintain order and avoid chaos? The cast of writers and actors for Project 2012 present all these scenarios in the form of live theatre and film combined.

The performance begins with newscasts depicting events consistent with the world coming to an end. Visual segments engage the audience as experts legitimize the fear mongering by challenging and analyzing scientific evidence. After building the foundation for the prophecy’s credibility through film, the live theatre skits take an introspective approach allowing the audience to connect to the calamity of world events taking place. The live drama examines more closely how society is affected on a micro level. Empathy develops among audience members as the performance delves into the reactions of specific characters.

The acting for Project 2012 is not only superb, but also almost flawless. The list of actors sharing this complement is inclusive and extends to the entire cast. Describing each actor’s unique performance is unfortunately not possible because it would go over the word limit for this review. Panthea Belinda was quite natural in her role as the traveling student who befriends total strangers.  It’s just not Belinda’s dialogue, but her reactions to other characters and the props that allows the audience to easily suspend their disbelief.  Also, it’s quite unique how several cast members are able to play 2-3 roles simultaneously. Becoming one character is a laborious process in it’s self, but Ryan Smith, Spencer Kirkwood and Brian Calvert jump in and out of the separate roles with what seems like effortless conviction. Actor, Brian Calvert was often exercising this versatility. Calvert plays the prime Minster in one segment, and then the army sergeant, but the depth and substance of his other comedic redneck character is never compromised throughout the play.

The imminent prophecy and fear of the world ending was communicated well through the various live theatre scenes combined with the props, visual effects and film. The flow and transition from visual to live performance and had a natural flow. Project 2012 also maintained its cohesion as it combined the different genres of comedy and drama. The audience laughed often, but became emotionally connected as the performance approached its climax.  Seeing Project 2012 will not only be entertaining but engaging on a level that will resonate a universal theme after: “what would I do if I knew the end was approaching”?