Corporations in Our Heads

Headlines Theater does a lot of interesting work but it has also been around for a while. The company's latest offering Corporations in Our Heads was a four-night pilot that ran at the W2 Media Cafe from May 24th to 27th. In this forum theater production, on a stage lacking set, props or rehearsed actor-director David Diamond experimented with a new interactive theatrical technique. 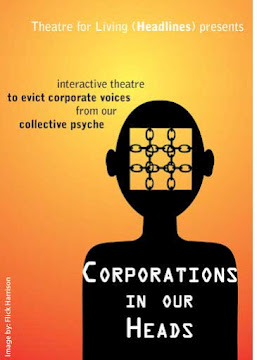 It went like this: three members of the audience were asked to tell a story from their own personal experience. The crowd favorite was selected, then using a series of theatrical exercises, the storyteller and various audience volunteers explored the influences underlying the storyteller's actions within the story.

These exercises were interesting and appeared largely successful. The audience became increasingly excited and engaged with the performance they were creating as the two and a half hour production progressed.

However, I could not shake the feeling that I was a participant in a theater class rather than an attendee at a theatrical performance. Had I arrived at the event expecting to attend a workshop the slight uneasiness I experienced may have been lessened.

Yet, I suspect that my discomfort was, at least in part, related to David Diamond's manner of addressing the participants. As he repeatedly asked if participants understood what was being asked of them and corrected those who interpreted his instructions differently than he intended or chose intentionally to deviate from them, he came across as condescending.

He also often interrupted the storyteller's explanations and monologs if they took directions he didn’t anticipate. Such approaches were counterproductive to the performance as they limited the degree participants had control over its direction which after all is one to the primary objectives of forum theater.

It also seemed that, when asking the audience for reflection on the activities occurring on stage, David was waiting for specific or correct responses as his appeals for further input seemed to be motivated by his own personal agreement with the comments made rather than by an attempt to probe the audience for their input until a sense of consensus among them had been reached. This again removed control from the participants and audience members.

Unfortunately, the unequal power dynamic that Diamond used is one I have witnessed previously at Headlines Theater productions and it runs in opposition to both the success of the productions and the stated aims of the  “Theater for Living”, the strategy underlying the philosophy of the company, is supposed to be “about empowerment - about people being the experts in their own lives and being able to use theatre to make change.”

Back in 1981 David Diamond became a founding member of Headlines Theater and he has served as artistic director since 1984.  After over thirty years with the same company and twenty eight in the same role, the latest pilot production of Corporations in Our Head suggests that maybe the loudest voice in the mind of Headlines Theatre the needs addressing is David Diamond's own.