CJSF volunteer Jay Peachy attended the intellectually strong, cleaver and smart production of Art on November 22nd at the Inlet Theatre in Port Moody, this is what Jay had to say about the story of Art...

“Art” is a play that explores and tests a long-standing friendship between three men when one of them purchases a very expensive piece of abstract art -- a large painting consisting of white lines on a white canvas.   The production features; Dimitry Arvanitis (Marc), Michael Weir (Serge) and William Valenzuela (Yvan). “Art” is playing at the Port Moody Inlet Theatre until November 28th. 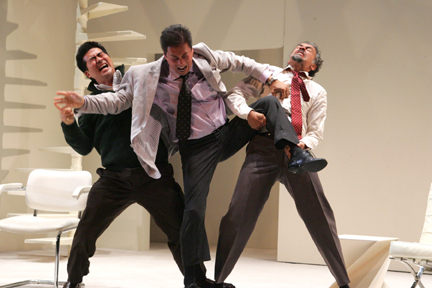 The story revolves around three characters; Marc a hyper-analytical aeronautical engineer, Serge an arrogant pseudo-cultural elitist and successful Dermatologist, and Yvan the neurotic, people-pleaser. This interrelationship between characters and art is a microcosm of the mind of a North American male; the pursuit of self-definition and superiority, cultural intellect is the preferred weapon of choice here.  Conflict erupts when Serge proudly pays an exorbitant amount for his new piece of work.  Marc sees this as Serge’s attempt into breaking into the cultural elite and feels that he has to save Serge from what he feels is a path of destruction.  Problem is that Marc’s expression of tough love creates hostility between the two.  Yvan, whose neuroticism is fueled by the stress of an upcoming wedding is caught in the middle of this fight and is tossed around like a rag doll in the process.

In today’s mainstream pop culture the role of men is typecast as a couch surfing, fist bumping, sports fan.  However “Art” is a refreshing escape from that. Arts and Culture references were tossed around like Jelly Beans.  The dialogue was sophisticated and the interrelationship between the characters was complex.  How Marc and Serge described their relationship with each other was hyper analytical, ego maniacal and loud. Their relationship somewhat analogous to those endless pre and post game analyses you would see on your local sports channel.  The intense arguments between all three characters played out like emotional pinball, you really didn’t know who was going to go on “TILT” next.  The performance by all three actors was strong, engaging and hilarious.

Although some of the arguments may seem over the top, it doesn’t get too tiring.  The audience is given moments to catch its breath and think, what the heck is going on here? So if you’re planning to go, clear your mind from any distraction, you may miss a hurling insult or two. “Art” is more complex and focuses on more than just art, it’s the expression of the male ego, it’s conflict at its best or worst, now what else would you expect?