Improv is a funny thing. No, literally, improv is a funny thing. It has funny people too. I had the (dis)honour of attending the premiere of The Amazing Improv Race last week. For those unfamiliar, it is a “competition” where three improv pairs show-off their best make-believe to a hysterical audience. The prize – at least on this night – was a six-pack. 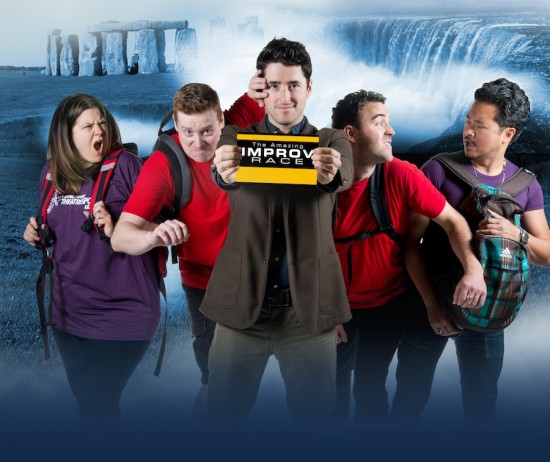 Improv being improv, theatre sports being what they are, and with this being a contest and all, it could not simply be a night of fun(ny). Of course the show had to be in the style of the Amazing Race. If that wasn’t enough, each duo performed as characters – or rather caricatures – in this case a husband and wife from Texas, a skinny-fat set of German identical twins, and a pair of overly macho fighter pilots performing from an undisclosed location (secretly Area 51).

Among the performers this night were local drama teacher Graeme Duffy (ambiguously gay German), long-time improv member Michael Teigen (team fighter pilot), and Comedy Network star and improv legend Roman Danylo (Mr. Texas).  The show featured everything from talking heads, to making creatures out of aluminium foil to dropping a pie on the floor. (My date for the night got to partake in that latter game, as the hands of Graeme Duffy).

It is just hard to judge how good of a job an improviser did, since most comedy is subjective. Yet improv knows this and the host awarded teams points based on audience applause. (it’s a very inclusive and participatory event). There were double-entendres, there were single entendres (especially from those pesky Germans), soliloquies; all of which left the audience members in stitches, Too sum up, I’ll quote my friend Julia, who accompanied me to the ball that night: It was a hilarious spin on the Amazing Race and the actors really played their characters well.

The Amazing Improv Race – presented by The Vancouver Theatre Sports League – runs until August 31st at the Improv Centre on Granville Island. For tickets and other information visit www.vtsl.com