CJSF volunteer Jay Peachy reviews the montreal based indie/dream pop group Young Galaxy at the Biltmore Cabaret on October 28th. After the show Jay caught up with Stephen Ramsay, who talks about the bands future direction and journey of finding the groups longevity within the realms of the music industry, this is what Jay says.... 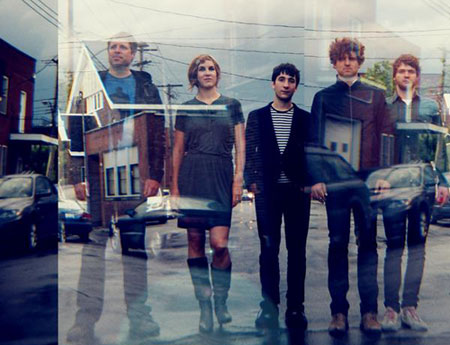 I had a chance to speak with Stephen Ramsay, co-lead of the Montreal based band Young Galaxy.  They were in Vancouver last week performing at the Biltmore Cabaret.  Stephen and girlfriend Catherine McCandless who both lead the 5 person group have roots in British Columbia.  Ramsay refers to their genre as part of the growing ‘Couple Core’ bands where off stage couples also collaborate musically.  Having toured with his previous band STARS, the couple were apart a significant portion of the time, and creating together was the only option.  The situation is working great he says.

Young Galaxy recently took a major risk by not renewing their relationship with the highly successful Canadian independent Label, Arts and Crafts.  Ramsay mentioned that controlling their destiny is primarily based on the future than in the present.  While he stated that there was no animosity or philosophical differences with the Label, it was the rapidly changing industry that was a major factor in his decision.  He said, “its’ not just bands that are struggling, labels are too. Everyone is working in competition with each other to stay afloat and figuring out new ways to create revenue for themselves.  With Arts and Crafts we didn’t have large philosophical differences; in fact we were likely more the same.”  Preserving their creative integrity by not having the weight and expectations of a label is important for them in their pursuit of longevity.  He felt that many bands get caught up in blaming Labels for their lack of success. Ramsay feels that bands now need to take more ownership, even if that means tempering their expectations in the short-term.  Even under the management of the Label, YG needed to make tough business decisions, in reducing their touring costs, which were not comfortable.  Ramsay believes it seemed part of their growing and learning experience.

Their concert on Wed Oct 28 at the Biltmore Cabaret seemed to have smaller attendance than they likely deserved.  Having a U2 concert, close out their tour on the same day at BC Place likely had a lot to do with it.  The bands, space pop style combined with co-lead McCandless captivates.  While a good performance that night and their full sound with favourites Destroyer and Long Live the Fallen World, an overzealous fog machine however, seemed to mystify their presence on stage at times.  Ironically, it seemed a little symbolic of their journey of finding a way on their own. However they seem grounded in their integrity and authenticity, definitely a great base for longevity.