Too often I look through Pitchfork, or Rolling Stone and find myself wondering why certain bands attain superstar status. To me many of them seem like their missing one or two or even several pieces that would elicit such a title. Because for every band that’s hailed ‘the next greatest band’, like Animal Collective or Odd Future there are one or two bands that are criminally underrated.  Bands who given the right chance, the right break, could become mega-stars. The Sounds are one of those bands. 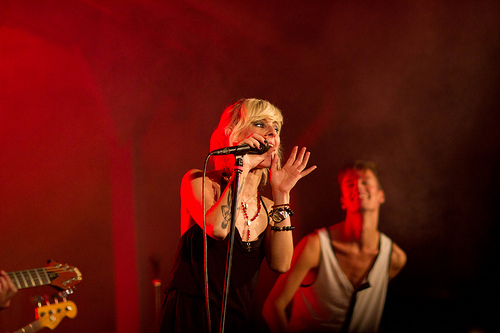 It absolutely blows me away that The Sounds are not one of the biggest bands in the world.  Last night at the Commodore only cemented that thought in my mind. Pure, unbridled joy flowed through the three-quarter-filled concert hall as Maja Ivarsson and her band of asymmetrical haired Swedish rockers ignited a furious dance party.

From the opening synths of ‘It’s So Easy’ from their latest album ‘Something to Die For,’ Ivarsson had the crowd in the palm of her hand. Proving with every high-kick that she is one of the elite front-women in Rock ‘n’ Roll. She oozes sex, passion and talent; a performer with such natural skill that she made the whole night, the whole act feel effortless. It was the last show of their 6-week North American Tour, but you couldn’t even tell. The energy The Sounds put out on stage made you feel like they were playing these songs for the first time.

Let’s talk about those songs. There isn’t a single Sounds song that isn’t catchy, there isn’t one wasted melody or unfinished chord progression. Every single track is filled with gorgeous hooks, sweeping synths and dance drum beats. Were you completely unfamiliar with The Sounds, you probably couldn’t even differentiate between their singles and their deeper album cuts, they are all so uniformly strong. New tracks like ‘Something to Die For’ mixed perfectly with their old hits like ‘Living in America’ and ‘Seven Days A Week.’ The only break in the whole show came when Ivarrson lit a cigarette and, joined only by a piano, sang the heart wrenching ‘Night After Night.’ It was a stunningly beautiful performance that gave the audience just enough of a breath to mentally prepare for the grand finale dance party to come.

By the time the last chords of ‘Hope You’re Happy Now’ melted away and the band left the stage there were nothing but smiles left as everyone shuffled breathlessly to the exits. To anyone that was there, they know. Oh do they ever.  This is the band that should be filling arenas. This is the band that should be headlining festivals. This is the band that deserves the accolades that so many undeserving bands get heaped upon them. The Sounds are on of the greatest bands in the world and the only bonus of them not being massive is that we get to see them at amazing venues like the Commodore. If you weren’t there, you missed the show of the year.