Last week I went to see Myelin Sheaths, Korean Gut and the Courtneys at the Cobalt.  The show was a fundraiser for Kier Fist from the Lethbridge, AB punk band Fist City’s top surgery.  Travelling from Lethbridge was Myelin Sheaths, who along with Vancouver’s Korean Gut are some of the incredible bands with releases coming out on Alberta based Mammoth Cave Recordings. 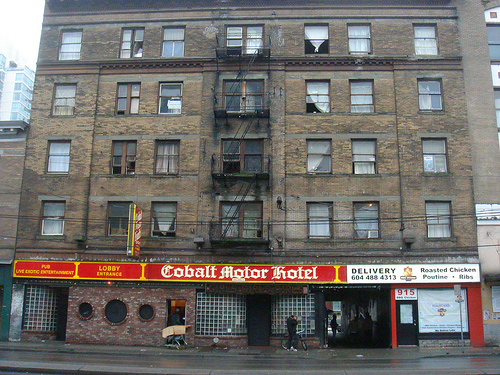 The first band was the local lo-fi band the Courtneys and they killed it.  Their minimalist punk tunes fitted the plain expressions of the lyrics torn from livejournal entries.  I hope that doesn’t sound dismissive because I loved them; the songs felt honest and only a healthy amount of reverb distorted the sincerity of the lyrics.  Also, a heavy dose of cleverness, sarcasm and irony kept the songs far from cliché with titles like “Dan Mangan”, “Keanu Reeves”, and “Social Anxiety”.

Jarrett Evan Samson of Korean Gut appeared as a hurricane in board shorts and attacked the crowd with a wall of noise I never thought possible from a single guitarist.  Korean Gut abandoned the irreverence of the Courtneys and replaced it with self-loathing, angst and fury.  Going as far as dedicating a song to a girl who had left him and moved to Germany and describing with vindictive glee how her Visa had been declined.  But for reals, Korean Gut is one of the best new bands in Vancouver.  Their song “If You Want” is a perfect lo-fi surf jam and seeing them live proves they have a lot more material behind them and EVERYONE should be excited for every one of their upcoming releases.

The last band was Myelin Sheaths!  Apparently they hadn’t played together in a while and felt unpracticed but I don’t believe them.  They played like a band that had every song down and took the room to unleash punk fury throughout the set.  The two front women and one front man shared vocals to fit in way more of the Ramones-y shouting sing-a-long choruses that caters so well to my pop sensibilities.

These bands are part of the incredible wave of awesome lo-fi coming out of BC and Alberta, if you want to hear more look up these bands and check out Mammoth Cave Recordings for a whole lot of 7” worthwhile releases.