It was a mild October night when the double headlining team Loney Dear and Asobi Seksu graced the stage at the Biltmore Cabaret. Representing Sweden and New York respectively, the room was filled with a buzz that can only be attributed to the thrifty glee of experiencing two equally appealing bands for the price of one. However, cost effectiveness alone does not make a concert. 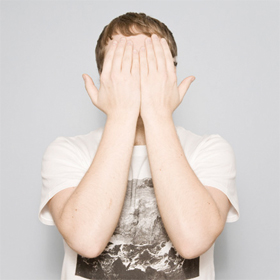 After Biltmore favourites Sleepy Sun carried out the opening duties, Loney Dear took the stage. Now, the first of two bones I will pick tonight enters the spotlight. At least three people at the show, including one staff member, referred to the band as LONELY Dear! I would like to say this is the first time I had experienced this, but the fact is it’s an ongoing phenomenon. People see an L where there just isn't one. Usually I would toss these grammatical mishaps aside, but after waiting three years since last seeing Loney Dear to see them again, tonight this annoyed me. This review is my outlet, so there. Second bone to follow...

Loney, Dear went on to play a collection of their more popular songs from their five album back catalogue, the most recent of which being Dear John. The gathering of ‘hardcore’ fans at the front was appreciative and responded warmly by Emil's ever-endearing foreigner humour. Imagine trying to play amazing songs and then cracking a joke in a second language, not easy. The bands' line-up varies from tour to tour, but tonight was a five piece. The fivesome clearly impressed the audience with their signature melancholy-but-somehow-boppy music, fronted by the unmistakable, soothingly nasal tones of Emil Svanangen. These guys are always a joy to see live. They do a first class job of capturing the sounds you get from listening to their LPs in the comforts of your home thus transcribing this and the sound quality into a live performance. Partial credit for this has to go to Sammy on the keys, whose synths and pads bring the overall sound to life. The Swedes finished off with a beautifully stripped down rendition of Dear John, the title track from their 5th offering. This brings me nicely to my second bone. I loathe it when people pay to go to a show and then choose to ignore the artists they have paid to see, opting instead for unnecessarily loud conversation. I'm not even talking about the odd table; this was happening en-mass! Emil asked for quiet a couple of times before getting on with the song and letting his voice do the silencing for him. The set ended with rapturous applause, and in true 'nice-guys' style, they came straight out and mingled with the fans.

A fifteen minute turnaround brought about the ethereal emergence of Asobi Seksu. Hailing from NYC, the name is a colloquial Japanese expression meaning 'casual sex'. I had a feeling they were promising more than they could deliver. Twenty seconds into the first song I realized I had made a mistake in taking a seat towards the back of the room. Singer Yuki Chikudate stands about 4'8 and cannot be seen. This lady has a very crisp, piercing voice, her voices calls you to attention, seaps into your auditory system. Yuki's voice penetrated the wall of background noise like the searing heat of a bullet entering thick flesh. This just adds to the weirdness of being in a situation in which you can't see where this voice is coming from! Did they have some kind of futuristic fx pedal that did the singing? Or was she lying down?

Asobi didn't waste any time in bashing out their chosen songs, most of which can be found on their LP 'Citrus'. Three songs in and it became clear that their sound would lend itself a lot better to larger, more open venue. The keys and electric guitar produce heavy waves of noise adorned with generous helpings of delay and distortion, creating a somewhat over powering effect on the senses. This was also apparent by the bass and vocal layers. The result was this; a few of the songs come across a little samey, which is not an impression one gets from popping Citrus into a CD player. The set was enjoyable nonetheless, the pick of the bunch for me being 'Thursday'. By the end of the night the crowd had dissipated significantly, but then again it was a school night.

Sadly, I don't think I would pay to see Asobi Seksu again, but as for Loney, Dear, I can only pray that I do not have to wait another three years before I hear those badly phrased jokes again.

ASCENSION
What you will hear:
Ambient Electronic

Turn off your phone, shut off the lights, grab your partner, or vibe out solo. ASCENSION is your metaphysical sonic chill pill. Every week host Cloud General you fresh ambient electronic beats and chats about the galaxy, nature and new age philosophy.