While they only garnered a small turnout at the Media Club on June 16th, particularly as it had been a Sunday night, Hooded Fang brought the ease of a friendliness with casual jokes on stage, looking like they had just stepped off and out of their tour van minutes before their performance. 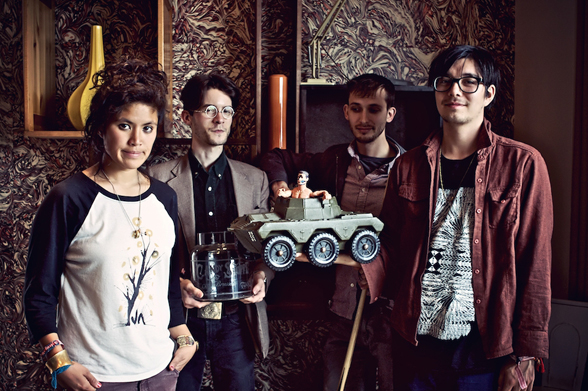 What had been a seven to six-member band originating from Toronto, now claimed to have formed into four, these guys and girl seem to play on the flexibility of picking up another guitarist on the way during their tour.  But another guitarist couldn't hurt Hooded Fang's sounds, which in the recorded versions of their new album, Gravez, consist of lo-fi vocals accompanied with the kinds of echoes you would hear during mic tests.

Yes, I believe this is an essential part of the appeal of their music.

It is always a pleasure to hear live performances fare similarly to their studio recordings, and an advantage at that in order to have most expectations met (except maybe the sound quality of the venue or how very close you are to the vibrating stereo and if you brought earplugs to secure your proper hearing).  Meanwhile any minor technical difficulties were made up for with brief bar jokes narrated by the band's drummer (D. Alex) who stepped on stage as Hooded Fang's hooded personae throughout the show.

The band follows with its second song, “Ode to Subterrania”, nearly triggering a few more shoulder sways and faster foot taps, including mine.  Well, this and “Wasteland” are personal favourites and I felt glad enough that they played both, though somewhat in a faster pace than I expected.  Whether or not this was intentional (or only in my head), it may have coincided with the crowd easing up to those who decided to get loose.  But despite not being able to rub off any unrestrained body shaking on every audience member, Hooded Fang was still left with some head-bobbing and foot-tapping within the 45-minutes of the show.  But I think Vancouver likes its 'chill' character.

Hooded Fang was no disappointment nonetheless, as the crowd cheered for an encore, to which the band responded with a tad off-tune and apparently unpracticed play of “Bye Bye Land”.  And it certainly was an appropriate take-off for the band onto their next tour destinations out of Canadian borders.