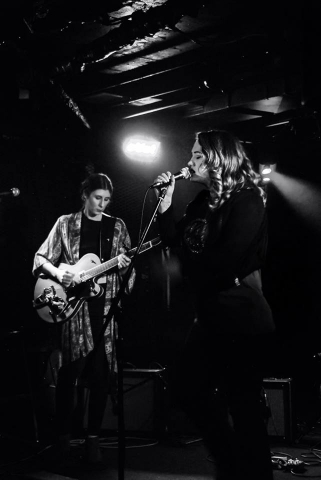 Hollow Twin’s EP release show on Friday, January 26 at the Biltmore Cabaret was a blast. It felt like a gathering of close friends, complete with words of support, hugs, lively conversations, and sense of an overall relaxing atmosphere.
Porteau and Little Crow, two very talented bands, gave the show a wonderful kick-off. Starting with Porteau, the group folkish motifs, carried by lead singer Victorial Willaims' dark lyrics and powerful voice, made me feel like I’m in the second season of Twin Peaks, sitting in the Roadhouse, being completely carried away from this world. I Nothing existed except for me, Porteau’s music and darkness of the Biltmore Cabaret.
Next up, Little Crow. I could never imagine, after listening to Porteau, that it would be possible for the next band to be as good, and even outdo them. Somehow, Little Crow found a way, as Emily Seal and Kas Baker charmed the audience with ther sad, but slightly more upbeat songs. Just as moving as Porteau, their music crawled into my soul, and have yet to leave me. To be honest, I downloaded their 2016 self-titled EP as soon as I got home. One of my favourite tracks is “Restless Love”, and it is a must listen.
Unsurprisingly, once it was time for Hollow Twin to appear on stage, people were super pumped. The band performed a beautiful and touching set, complete with a couple of covers alongside tracks off of the their newly released EP, The River Saw Everything. Everyone could see how tenderly Becky Wosk and Emmalee Watts feel about their songs, singing with care and putting their emotions entirely into every note they play.
Each of these bands were fantastic live and I highly recommend listening to all of these great bands!