Tamara Lee, reviewer and photographer, attends and documents the DRMHLLR show at the Media Club...

Standing before the stage at their recent Media Club show, I knew I was about to hear an anomaly for local bands. This four-man show known as DRMHLLR, is one of few bands around town that is entirely instrumental. Not only are they minus vocals, but their sound could be unusually classified as the indy-rock genre, rather than electro-pop or experimental jazz, where many of their instrumental siblings hang out. 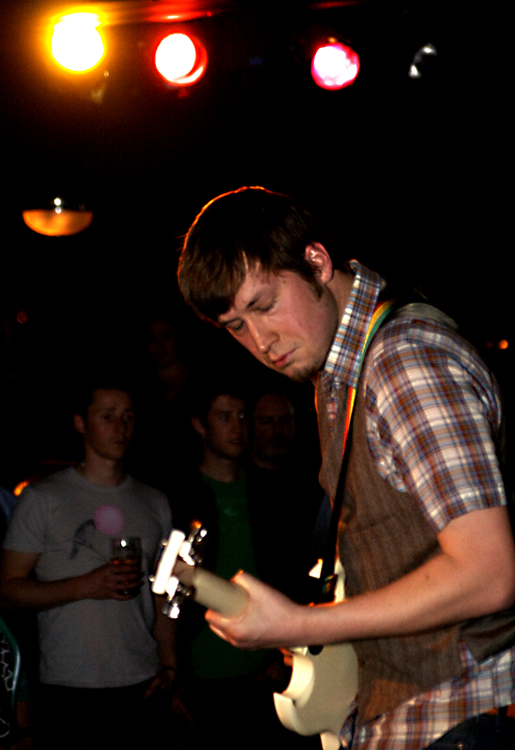 As they modestly claimed the stage to begin, I was skeptical, wondering how an instrumental band could put on a good show. Would they connect well with the audience or just add a musical background layer to the room? Without words, we may miss their point of view…but then again, perhaps these quiet chaps really just don’t have much to say…

After only a couple of bars, I quickly learn how wrong my pre-judgments are. Before me a deep and philosophical musical conversation begins. The innocent melody presents questions, followed by strong harmonious statements. The sounds are transforming and thought provoking.

I read once that people listen to music and lyrics with two different sides of their brain.  If the logical side were for words and the creative side understanding the music; certainly DRMHLLR’s wordless songs fall outside of reason and inside of emotions. Something about the purity of lyrical absence brings the musical experience back to its roots; it’s almost tribal speech in a language of simply rhythm and tones.

“Why do we need lyrics?” Benjamin Schütze, Drummer, agrees in a post show interview.  “When we write our music it is more about textures and sounds. That’s a tricky thing to add words to- you could easily ruin the moment.”

Schütze illustrates this conundrum for me in an anecdote about his childhood. Back when he was a boy in Germany he could sing every word of ACDC’s songs without understanding a lick of English. He was very surprised to learn what he was actually singing about years later.

To lyric or not. Clearly, DRMHLLR has been challenged with this question before.  I ask Schütze if he thinks it could be confusing for his audience to watch them without a ‘lead vocalist’ since this is so often a band’s central focal point.

“Maybe,” he answers, “ but that actually is more representative of who we are (as a band) anyway. “ He explains that there is not really a central idea person; their songs are written as an equal collaboration. Throughout DRMHLLR’s history, the group has had many strong opinions about their musical direction. Being a group of diverse and passionate individuals, they sometimes disagree with each other and are usually highly critical of what they produce.

“There is always the question of how it is being received by others.  Really it will always be different for everyone. So we can only revisit the music and ask ourselves again, what is our intent?”

Meticulous, though they may be, the result translates in to a strongly cohesive musical statement. You ‘d almost get the sense that they were family from the apparent mutual understanding between them. The connections feel organic as their music flows naturally.

“..it’s an interesting thing. Someone else is making a sentence…then I add my bead to it and change its direction..”

These progressions are even obvious to the listening audience. Their track, Baby Tooth Tiger, begins with a simple melodic exploration, and as each instrument adds a new layer, it quickly progresses to a thick, enriched journey through sound. From the outside, one might say DRMHLLR falls in the influential realm of bands like Tortoise or Domain, but calling them simply ‘post-rock’ would be a curtailment. Any track would embark you through random adventures, with a sense of travel almost through space and time.

When asked to comment on their inter-dimensional sound travel, Schütze jokes “(in outer space) if you could hear it, our sound might be like several clarinets repeating in high C…”

If their music landed us in a time era, it would undoubtedly be 60 million years ago when dinosaurs roamed the earth, although their name apparently doesn’t relate specifically to the historical dinosaur town. “It’s just a funny cliché.” Schütze tells me. “Baby Seal Club was also in the running”. I am told that the band also takes no official stance against vowels, though this quirky name inclines me to suspiciously disagree.

No matter which way I slice it these strange and fun guys can’t help but create thought provoking music. They sit on the outside of trends and engulf their audience with thick encompassing concepts. I don’t see any need for them to add words to their music, since DRMHLLR has indubitably said enough.