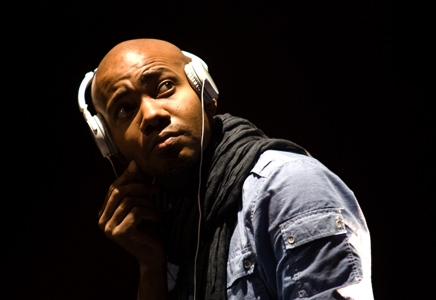 Multimedia artist Paul Miller, or DJ Spooky That Subliminal Kid, has come a long way from his initial involvement with the Soundlab Collective in New York City in the mid-90's to his later multimedia projects Rebirth Of A Nation, and his current collaboration with the Vancouver Art Gallery on its latest exhibition Mashup: The Birth Of Modern Culture. Taking his stage name from a character in the William Burroughs's novel Nova Express, Miller merges cultural and musical theory of postmodernism and musique concrete with DJ mixing techniques to explore the experience of sound in the info-laden context of the 21st century. Whoa. So when I heard he was re-scoring the soundtrack to the Situationist film Society of The Spectacle on January 30, I had to go. After all, it was the Subliminal Kid behind the wheels.

The show itself was an attachment to Vancouver's signature Push Festival, which was entering its second week of radical live performances. The venue was the Fox Cabaret, a shadowy theatre turned concert hall on Main street. Instead of your usual mid-20s hipster or hip-hophead concert trekker, I noticed a distinctly older crowd that night—Push festival pass-holders, no doubt. There were chairs at the front of the stage. I joined fellow CJSF-er Trevor in the second row, and settled down for a long wait.

It didn't take long. DJ Spooky, joined by local musicians Peggy Lee, Mark Ferris, and Stefan Smulovitz, entered the stage shortly after 8:30 to a short din of applause. As means of introducing the show, DJ Spooky contextualized the Situationist movement and its notorious founder Guy Debord. The 1973 film itself is an adaptation of the Marxist critical theoretical manifesto Society Of The Spectacle that developed the concept of the spectacle. After giving big props to the musicians and their improvisatory skills, the black-and-white film began to play to a hauntingly fragmented electronic note and rising violin chords.

The film launched into a grainy parade of posing half-naked female models, formations of marching soldiers, street-level scenes of protests, riot police beating on protestors, political figures, routines of modern living and automation, with the occasional appropriated Hollywood movie scene. The theory itself manifested through subtitles, altering our perception of the flux of images with its re-interpretive socio-cultural critique. In watching the dense collage of juxtaposed images, I felt the menace of modernity blown up to unreal proportions. Images of war and anarchy that appeared alongside the plastic passages of the models were like ghosts in the filmic medium. The graininess of the film's quality lent it an air of ceremony; the medium spiritually evoked the zeitgeist of the degraded modern past.

While the DJ spun and churned out the dystopic soundscape, the string trio weaved their harmonies over the madcap electronic arrangements. Massive as the master track of some epic virtual reality, Spooky, God-like, channeled the energies from genres as dizzying and diffuse as oldschool boom-bap Hip-Hop, dubstepstep, and ambient to lend a new interpretative level to the film's drastic imagery. Dark and muddy ambient interludes swamped the hall, while at other times, pounding drums drove a juggernaut rhythm to the accompaniment of Gotterdamerung glockenspiel and glitchy flashes. The string company were in great form, at one point conjuring Vivaldi's Seasons (Spring) and Samuel Barber's Agnus Dei on strings to the rushing apocalyptic soundscapes.

The whole of the show proved to be a whirling audio-visual intersection between filmic mass-media patchwork, cultural theory subtitles, and a live mixed score. The greatest thing about the multiple levels of juxtaposition was how the three different elements worked well together to deliver this live performance. Not a beat was off, nor an image spared in its whirlwind re-envisioning of the theoretical film. When the show finished, I introduced myself, got my album signed, and left shortly thereafter with Trevor, mind still reeling over the complexity and revolutionary experience that was DJ Spooky with string ensemble.