Chairlift gets people out of their seats

Immediately the room was filled with energy. The first song had a beachy feel with the use of steel drums. Polachek was an interesting sight. 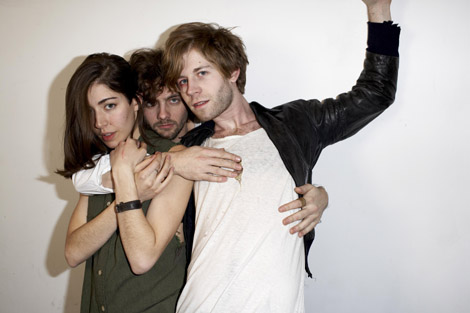 On April 6th I went to see Chairlift with Nite Jewel at the new Electric Owl on Main Street. The venue reflected the genre of music with its neons of orange, red, yellow, and blue. Nite Jewel started the night off around 8:30. They are a four person group represented by their young brunette singer, Ramona Gonzalez. She had a decent voice that bled 80s. However, the songs seemed off-time, slow, and muddy.

Although Gonzalez gained more confidence by the third song, there was no chemistry between the band members. It was as if everyone was their own separate musical entity. The bassist acted the part, being nonchalant. The keyboardist was easily the most talented with his interesting musical flourishes. The drummer merely looked bored.

Nite Jewel has lots of potential but I was left feeling like I was watching live music in a coffee shop. I felt like I was in the movie Labyrinth and David Bowie was about to strut out, juggling glass balls. Everything felt on the verge of danceable. This was evident by the static dance floor. The most exciting part of the show was probably their heavily bearded roadie.

Chairlift was a whole different animal. Caroline Polachek opened with straight-up yelling, grabbing everyone’s attention. Immediately the room was filled with energy. The first song had a beachy feel with the use of steel drums. Polachek was an interesting sight.

She was wearing a baggy black t-shirt tucked into high-waisted jeans. She danced strangely and magically. I was reminded of Patti Smith because she didn’t care what she looked like, she just felt the music. The third song had an intensely industrial feel through the percussive sound of clanging hammers. Their fifth song was my favourite, Met Before, so I abandoned my observatory seat at the back of the club and went to join the crowd.

The sixth song was the weaker point of the set as the vocalist tried too hard to change her voice. It sounded best at its natural volume and pitch, allowing it to be stronger.

Their seventh song was “Bruises,” the one used in the iPod commercial in 2008. The energy seemed to be sucked out of the band for this one, even though the crowd was more into it. It made me wonder if Bruises was to Chairlift as “Creep” is to Radiohead.

The eighth song was a ballad with intensely powerful percussion that sounded like rumbling thunder. I felt the sound physically in my body. They ended with Evident Utensil and Amanaemonesia. Chairlift was one of the best live bands I’ve seen in a while.