I was solo at the second concert, and as my luck would have it, it was the legendary psychedelic Acid Mothers Temple from Japan that graced the Electric Owl on April 21st. 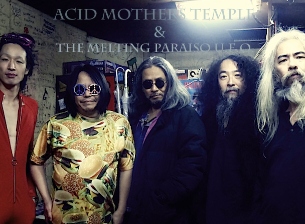 Like a concert greenhorn, I arrived early. Early enough to have the privilege of watching the stage techs set up the equipment and microphone stands. Opening act ST 37 didn't start until 9:30, which marked their first return to Canada since 1987. A Space-Rock band from Texas, their kaleidoscopic sound set the mood for the later heavy, hallucinatory high-watermark courtesy of AMT, not to say they weren't heavy themselves. With juggernaut crescendos echoing across bleak, spacey soundscapes, their performance touched both fury and glee. Their standout track was “Feeding Frenzy”, a mellow melody akin to Mazzy Starr's “Fade Into You”.

The current incarnation of Acid Mothers Temple & The Melting Paraiso includes the frontman/guitar guru Kawabata Makoto, bassist Tsuyama Atsushi, synth wizard Higashi Hiroshi, guitarist Tabata Mitsuri, and Satoshima Nani on drums. Weird enough individually, united they resemble a lineup of keynote speakers at a counterculture convention, or a tribe of beard-stroking druids from the dark side of the moon. With the face-melting noises they generated in their set, they affirmed their cosmic membership of some enlightened space race and rocked the crowd all the way to Alpha Centauri.

AMT hit the stage at 10:45 with the greatest sound in human history, not counting the static from their other concerts, which lasted something about a minute and was all synthesizer whooshes and screeching banshee guitars. From this first note, the band progressed to an acid symphony of guitars, powered by Nani behind the drums. Who knew guitars could blow the roof off? The volume was terrifying, sending atoms into careless panicky sentience, and the crowd into a head-bopping frenzy.

The rest of the show was delicious delirium. Every sound was acid-blotter chew and mental health game, with those phenomenal howling guitars and synthesizer whooshes launching into space. Halfway through the set, Tabata Mitsuri pulls out a Japanese flute to accompany the weirdness. Gibberish kamikaze haikus (which counts as singing) dissolve into a cosmic space jam, shredding guitars and melting distortion.

And then they played “Pink Lady Lemonade”, the only song I recognized from their vast discography, as immense and majestic as the totality of outer space. The haunting notes crept in, which foreboded the god-smacking majesty. A laid-back virtuosic guitar performance by Kawabata Makoto had the crowd whooping, before the drums hit and consciousness cut to a higher dimension. After a short jam, they reprised “Pink Lady Lemonade”, this time, diving straight into the amphetamine pulse-thudding cut.

Nearing the end, the light show got particularly epileptic, spazzing and shattering traffic red and cool blues behind the swaying trance-like form of synth wizard Higashi Hiroshi, and electric guitar guru Kawabato Makoto, who coincidentally, was swinging his guitar in circles by the handle as if back-stroking in air. The crowd went riotous, chanting “AMT!” and “F** Yeah!” over and over, stomping and knocking the stage. The leftover energy of the show transferred itself to a fight, which had to be carried outside. They made their peace over their shared love of Kawabato Makoto's guitar shreds, showing that even kinetic energy humbles itself before the sounds of Acid Mothers Temple & The Melting Paraiso U.F.O.