Susan Sontag was an American writer known for many works, including On Photography, Illness as a Metaphor, and The Way We Live Now. I had heard of Susan Sontag and read snippets of her work prior to attending Regarding Susan Sontag on September 30th, which is being shown as part of VIFF. From what little familiarity I had, my interest in Susan was initially tied to her relationship with photographer Annie Lebowitz, an iconic American portrait photographer. That this was my only knowledge of Sontag prior to the film, was a disservice to a truly unapologetic, formidable, powerhouse of a woman. 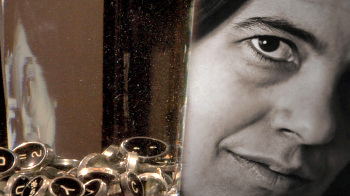 I think I found Sontag so interesting because she was entirely herself. She wrote from an early age and became an academic. She tried her hand at domesticity but found it to be unappealing, so she moved on. She lived the majority of her adult life in either Paris or New York. She was a critic, an essayist, a playwright, a filmmaker, a political activist, a feminist, and a cancer survivor. She wrote about photography, culture, AIDs and illness. She traveled to areas of conflict like Vietnam during the war and directed a play in Sarajevo during the siege. She was a lover of both men and women. She did as she pleased and followed her passions.

The film was captivating, which I don’t often find happens with documentaries. It had both structure and flow, despite not following a linear progression. While the filmmaker obviously enjoys Sontag, the portrait feels honest. It does not hide Sontag’s flaws. It neither criticized nor favoured. It let you formulate your own opinion.

Despite being the youngest person in the room – by at minimum 20 years – I would recommend to anyone seeing one of the two remaining screenings of the documentary. I know I enjoyed the brief window into an interesting life, and promptly went to the nearest bookstore to find out a little bit more.

Remaining show times are October 8 at 6:30 pm and October 9 at 1030 am at SFU Woodwards. Click on the link to see a trailer and get your tickets! http://www.viff.org/festival/films/f11562-regarding-susan-sontag