I am not going to lie; sometimes I wonder why an aspiring filmmaker would choose to do delve into the art-house genre. Is it the appeal of ambiguity? The cool, leitmotif filled imagery, the all-encompassing realism that embodies the genre? Regardless, with the current trends of “twee”, superhero movies, and dark-realist postmodern comedies taking the stage amongst the modern audience, art-house should be the equivalent of social-suicide. On the contrary, Lech Majewski’s Field of Dogs stands not only as a dedicated homage to directors such as Andrei Tarkovsky and Terrence Malick, but as a representation that the art-house genre is not dead, but just getting started. 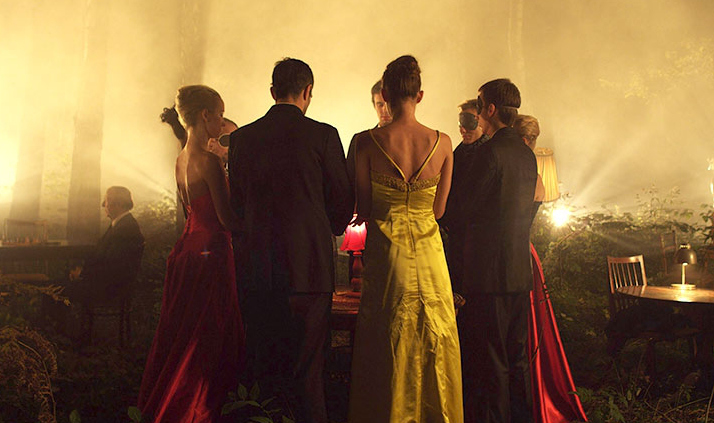 A story about loss, the film centers on a young poet (played by Michal Tatarek) trying to cope with the death of his best friend following a car accident. The film further explores all of the characters’ thoughts involving existentialism, idealization and devaluation of God, and all the other typical internal conflicts that thread these types of movies. However, Lech was clever on this one. His decision to incorporate Dante Alighieri’s Divine Comedy, an allegorical epic about after-life, serves as a loose narrative tool providing a sense of foundation onto which the contemporary audience can grasp. Segments from the poem would appear only during scenes when the protagonist was driving through the city streets and cease when Lech would desire full attention to the symbolic scenes at hand. This method helped in preventing the inevitable flaws of the art-house, which is the easy ability to lose the viewer’s attention without succumbing to boredom and lack of understanding or relevance. Utilizing Dante’s poetry as a bookmarker provided a perceptive sense of plot to which any audience could relate and follow. Considering the true meaning of this usage is arguably ambiguous, the audience should expect leaving the film as existentially confused as they were upon arrival.

The notable markings of this film are the serene scenes that fill up the majority of the film. Audience members should expect surrealist scenes of transcendent beauty and religious allegory that will leave you discussing the film for days on end with your date in Starbucks. Few films have been able to live up to the stylistic shift in cinematography that came with Terrence Malick’s 2011 film The Tree of Life, but Field of Dogs matches it with unrivalled cinematic beauty. This film is an equivalent to those rare, holographic Pokémon cards that you would cross your fingers on upon opening that foiled pack: truly rare to come by. If anybody ever has the opportunity to encounter a film such as Field of Dogs, jump into it without hesitation.

Your Radio Show Could Be Here!
What you will hear:
Open Slot

As a volunteer-run, not-for-profit radio station, CJSF programs are made by members of the campus and greater community.  Get involved!  Share the music you don't hear elsewhere on the dial and raise your voice.  For more information on volunteering with us, click here.