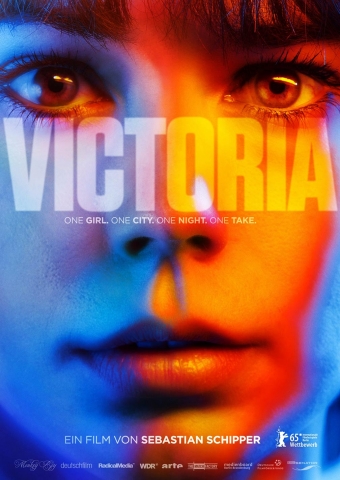 Victoria is many things: high-octane heist-thriller, transnational drama, triumphant experiment in technique, and a 'True Berliner' wunderkind. None of these qualities stood out to me when the credits flashed across the screen at its wind-down conclusion. None mattered at the end, save for the titular character and the fates of the Berliner bunch themselves. Beyond daring cinematic technique, ventricle-popping suspense, and the exquisite nocturnal predawn portrait of Berlin, what is ultimately paramount of Victoria is the heart-rending improvisatory performance of the stellar cast, which is nothing short of poignant.

As director Sebastian Schipper's brainchild-on-speed, Victoria also joins the narrow ranks of recent one-take experiments, notably Alejandro Inarritu's Birdman, and Gaspar Noe's Enter The Void, except with one conspicuous difference. Unlike its American and French counterparts, Victoria contained no technical subterfuge of evasive camera deflections and CGI gimmicks. Shot in a single sustained take across 22 locations in the span of 3 hours, Victoria is in addition a technical masterpiece, owing a fine debt to its cinematographer Sturlen Brandth Grovlen, who orchestrated the crucial camera course.

From a stroboscopic dry ice fog emerges Victoria (played by Spanish Laia Costa) in the midst of a dance floor crowd. Lightly she dances alone amidst the anonymity of mobbed bodies, but this care-free attitude is revealed to be surface. An attempt to converse with the bartender reveals her pervasive estrangement and lonely lot. As she leaves the subterranean club for an early underpaid shift at a cafe, she encounters a boisterous bunch of Berliners led by Sonne (played by Frederick Lau), who are denied entry. Slowly drifting with Sonne and friendly company in the glowing nocturnal ambience of predawn Berlin, she eventually caves to his cordial demands to join them for his friend's birthday. “Let me show you my world,” Sonne beckons to Victoria in between pick-up lines and jokes. And so starts the unrelenting journey to the end of their night, a moving shadow in the vein of previous German heist-film Run Lola Run.

Following the two-hour trajectory from start to conclusion, the film does not let up in its breakneck pace. Thundering through the tracks, it manages never to careen from its charted flight course. Its twelve-page script and customary improvisation is another testament to its technical achievement.

Though Victoria is consumed entirely as one fluid continuous scene, I was impressed by its sometime fragmentary quality. Significant moments occasionally break from the thread of narrative, presenting in their stratified existence a stark and poignant beauty. In between the tight action and the escalating drama are interludes of tranquil reflection, where conversation fades to a soft electro-orchestral score by composer Nils Frahmn, allowing for overtones of sincere friendship, or latter exultant ecstasy in the aftermath of the heist. Conversely, its epileptic moments of climactic actions and points of no return make for constant high watermarks of suspense and excitement, as we trace not only Victoria and Sonne's successes and failures following the heist, but their intertwined fate in this dangerous game. Will these two get a customary happy ending?

The sum collection of those poignant and determinist moments rattle like a pressure cooker and form the linear entropy that is Victoria. Stating something awfully familiar about modern alienation and metropolitan ennui, the film also possesses an uncanny emotional authenticity for its improvisational and one-take nature. As Victoria's ex-piano prodigy back story is revealed throughout the narrative, and the narrative itself plays out into a hot potato of bad choices and plain bad luck, our hearts can only beat so fast and sink so low before the final climactic finish. For all the occasional comedy of ESL moments (English is the lingua franca amongst the characters), the stark predawn beauty of the urban environment, and the intimacy between character and viewer, Victoria is ultimately great because of those close-captured emotive flash points, the relationships between characters, which the cinematic technique is critical to extracting from the narrative