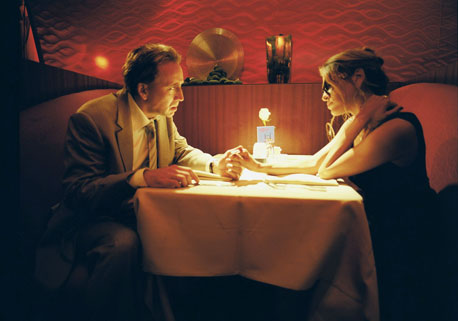 In this fast-paced modern life with its universal media stimulation and paralyzing-desensitized youth, the phrase “shock value” has developed into common themes for modern cinema. I have heard more than one cult audience member pine for the days of past artistic revolutionaries who, like Luis Buñuel, would rile up an audience to the point of personal physical danger. Well, in his fourth feature, madcap director Harmony Korine proves that shock is not dead. Trash Humpers is vile and unrepentantly horrifying. That said, this 78-minute abuse could not have been achieved with greater aplomb, inventiveness, or genius.

Trash Humpers is not for the faint of heart, the title is literal. Korine opens with a shot of his characters in the process of violating various trash bins. Using a handheld VHS camcorder complete with those indefatigable "REC" markers in the upper left-hand corner; the film centers around a small band of faux-elderly people and their hell-raising exploits in a small city. Short clips of their vandalism, perverted sexual antics, and other uninterruptible actions dominate the running time. The plot proceeds ambiguously, while Korine tantalizes the audience briefly with other characters who bring their own quirks to the group, but do not stick in the miasma of disturbing, speechless shots patterned after the random coalescence of memory. The film draws to a close with a beautifully crafted moment of anxiety, and then the credits roll.

Even without any consideration to the audience, Trash Humpers is a strong piece. Korine's cinematography is shaky and unpredictable, especially after we find out that he represents another character in the gang. The long takes of repetitive material accompanied by chants and songs that become leitmotifs for the different characters are more than slightly reminiscent of old home videos. Content-wise, material of your grandfather telling hokey jokes over and over may be mind-numbingly dull, but we watch them regardless with a curious inspection of what inspired the person behind the lens to take the footage. This film has the same quality: It is an introspective artifact of how, “twisted” one's subconscious really is. Furthermore, the ludicrous dollar-store ageing makeup used on Korine's actors completely disassociates them from reality. It’s the actions and appearance blended that make for a chimera grown from the debauchery of youth. Of course, as in all of his work, Korine magnifies that attribute ad absurdum.

But what is on screen is only half of the film itself. Anyone who believes that Korine is not gaming them is massively deluded. For in this case, the audience is merely a cage of mice upon which this occasionally cruel scientific experiment can take place. Simply put, Korine is pushing the envelope, and he succeeds. This atmosphere also works as a supplement to the film's content; I have never felt tension so accurately portrayed as in that audience.

So should you choose to brave the work of terrifying genius that is Trash Humpers, know that you'll be disgusted, and know that you're being used. If you make this realization early on, the film is fantastic. If not, make sure you wear your walking shoes.