This year's Vancouver International Film Festival which ran from October 2nd to October 16th, and among the films at the festival were a refreshing number of foreign films. Justin Chow, watched some of these, including North from director Rune Denstad Langlo, and had this to say... 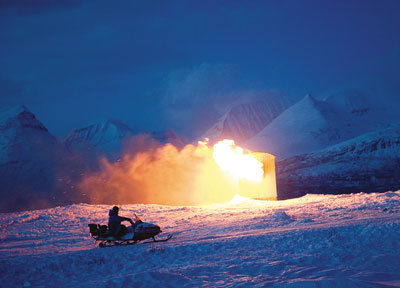 North encapsulates the adventure of an ace ex-skier, Jomar, as he ventures northbound through the snowy regions of Norway. Retired, depressed, and now a bumbling alcoholic, Jomar sets off on his snowmobile to see the 4-year old son he unknowingly fathered with his ex, who is currently together with his ex-best friend.

Along the way he has several eventful encounters with a number of people, including a lonely child yearning for company, an youth with severe issues regarding his innate homosexuality, and a stubborn old man. Throughout his venture, packed with various outrageous situations, he gradually regains his humanity.

Though quite uniquely comedic at various points, the film is quite vague and lacking in some areas. Several events are unexplained and unjustified as to why they occur, and the story ends abruptly after the protagonist reaches his goal, ultimately leaving what happens afterwards to the viewer's imagination.

Being a film from a foreign country, there is a certain unexplainable vibe it gives off, one of unfamiliarity. This can either be deterring or engaging to the viewer. I personally enjoy this aspect, as it adds an air of freshness to the film's presentation.