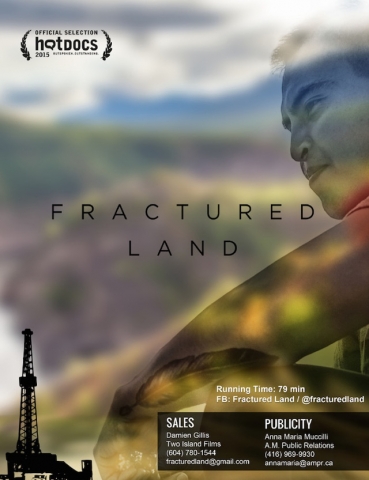 Fractured Land follows a young Caleb Behn, a First Nations leader in the making, who is deeply disturbed by the environmental destruction caused by the oil and gas industry in the land he calls home.

The film was playing at the Rio as part of a tour that will take Fractured Land across the country and the around the world. Fractured Land takes us on a powerful journey of a young man torn within himself and within his community as he is pulled in many directions within the greater world of activism.  His own family couldn’t better exemplify than this division: his dad being a devoted environmentalist while his mom holds a senior position in the oil and gas industry. Caleb has grown up witnessing first-hand the destruction of these corporations but has also reaped some of the benefits of the jobs this industry has created.

In order to pursue his sacred duty of defending his territory Caleb decides to become a lawyer to hold the corporations accountable for their unethical methods of resource extraction. The audience becomes privy of Caleb inner struggles as he tries to balance and reconcile the contradictions of this type of resource extraction and what it means to so many indigenous people across the globe.

The cinematography is breathtaking, the story is compelling and the strength of character and conviction of Caleb is definitely inspirational. At times it does seem though like the film becomes more about Caleb's personal life rather than the bigger picture of fracking and its destructive nature.

Nevertheless, Fractured Land is a film about courage: courage to stand up for a greater cause despite the many divisions within oneself and one's comunity and even the world.  In the wake of COP21 Paris Climate Conference, everyone should see this film in order to get a deeper sense of the importance of moving away from fossil fuel extraction.