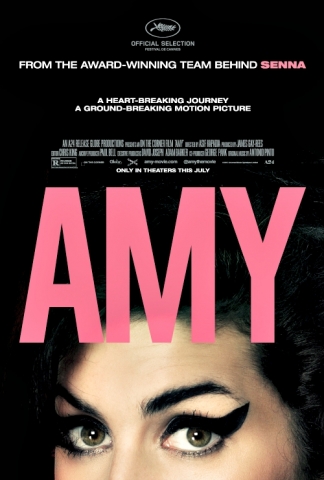 A true artist’s expression is not merely their motif, but their sanctuary. It’s the only way to co-exist with their demons. They do not seek fame; rather they have an intrinsic need to express their pain and suffering. Moreover, fame often compromises and puts restrictions on how they express themselves through art. They are coerced to project an image that sells. Gradually they succumb to the pressure of record label’s corporate mission statements and the constant hounding by the media. Amy Whinehouse had a very devoted, pure and sincere relationship to her music. It was often quoted how the soul and depth of her amazing talent went beyond her years. Yet, the demands of being famous exposed her vulnerability further to her issues with bulimia, depression, and alcoholism.

Award winning director, Asif Kapadia seamlessly weaves in interviews from family, close friends and Amy’s estranged ex-husband. Kapadia storyboards continuity within the collage that somehow maintains an organic flow. Although Kapadia homogenizes the home videos, studio sessions and live performance he is still able to introspectively dissect stages and the different relationships in Whinehouse’s life.  We see a feisty young Amy being raised by her single mom. Her loyalty and humility among friends is enviable. The audience first catches a glimpse of Amy Whinehouse vulnerability when she becomes estranged from her father at the age of ten.  Kapadia also takes the initiative to expose Whinehouse’s obsession with unconditional love which often made her vulnerable to wolves in sheep’s clothing. Vultures and opportunists, who at times included her own husband and father, lurked out of the shadows and had a feeding frenzy on Whinehouse’s  gravy train.

Director Asif Kapadia Kadadia designs a unique context that allows the audience to freely construct their own impressions of the five-time, Grammy award winning artist. He gives a lot of inclusive footage as well as narrations from people who were close to Amy at different stages of her life. An immediate connection develops between the audience and the very talented artist, not merely because of her humble beginnings, but because of her humility and devotion to her art. Her humour, wit and ability to improvise engage the audience further. Yet, empathy is foremost for Whinehouse as we see her vulnerably unravel – undiagnosed bulimia, depression and untreated alcoholism. Her meltdowns were inevitable considering how quickly she reached international fame.

Is fame a virtue? According to Kapadia, it’s an inevitable tragedy if fame happens suddenly and the artist isn’t able to adapt quickly and treat unresolved issues.