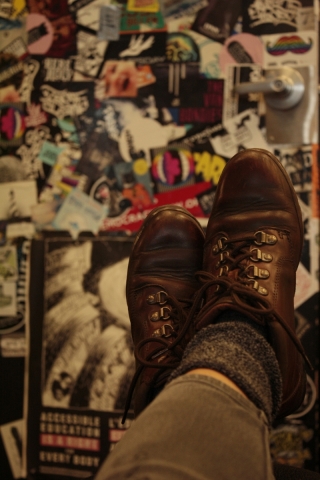 The opening night of Ballet BC's "Grace Symmetry" on February 20, 2014 buzzed with first night excitement and anticipation, as two new dance and musical collaborations were making their world premieres here at the Queen Elizabeth Theatre.

First up that evening, "In Motion," choreography by Wen Wei Wang and music by Owen Underhill ('The Geometry of Harmony'), first premiered in 2011,presented fluid, flawless dancing in mauve costumes accentuated by Turning Point Ensemble's passionate performance behind an translucent screen towards the rear of the stage. The innovative dance solos, duets and quartets were graceful, exhilarating, imaginative, and haunting. Flutist Brenda Fedoruk played a beautiful solo while dancers commanded the stage. The Duet 2 with Gilbert Small and Peter Smida was particularly evocative, sensual, and emotional. The hazy screen separating the Turning Point Ensemble sharing the rear of the stage with the dancers was technically interesting, as they were at once both on-view and 'out of sight' forming the backdrop. The musicians with their instruments were reversed in position, sitting facing downstage, while the conductor stood facing the audience.

After intermission, "Prelude" made its world premier with music by Lera Auerbach and choreography by Medhi Walerski. The wonderful costumes, designed by Kim Nielsen, of black pants/tights and flesh-coloured upper body suits made the beautiful, athletic, lyrical bodies of the ballet artists stand out and achieved total fluidity of movement and beauty of form for the "Prelude". The highlight was Duet, danced by Rachel Meyer and Darren Devaney, with a solo segment at the end where Devaney's naked torso spotlighted showed his breathing and dancer's muscles etched in light. This image showed all the strength and vulnerability of the human body, a symbol for the art of dance itself.

The surprise of the evening came when during the second intermission, Ballet BC director Emily Molnar announced that one dancer had fallen ill and that the third dance, titled "Here on End," would be a "different performance" that night as it was being modified during the brief intermission. Hence the surprise of seeing something totally unplanned, mixed with slight disappointment and curiosity about what was lost forever, edged up audience expectation and curiosity. An affable attitude from the audience members pervaded the theatre as the lights dimmed. 'Here on End," choreographed by Kevin O'Day and premiering John King's "Time vectors/still points," and again costumes by Kim Nielsen, brought together a more political work than what had come before in the evening. Dancers wore loose clothing and "baggier" bottoms to present the oppressions, and trials and tribulations inherent in the modern world condensed and trapped by time, movement, space and stillness. At times the formations seemed a bit simplistic and one wondered if these moments were the impromptu "modifications". There is no way to find out and one can only leap at futile guesses at which points the dance was unplanned. I found myself caught up in this guessing game. "Here on End" was sensational, ending the evening on a high note.